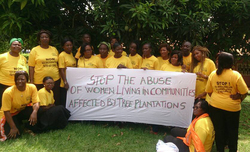 Women demand that oil palm companies stop violence and give back community land
International Press release. March 7, 2018.
Women demand that oil palm companies stop violence and give back community land
On 8 March, International Women’s Day, hundreds of organizations and individuals demand an end to the violence against women living in and around large-scale oil palm plantations expansion.
A petition has been initiated by women in West and Central African countries where industrial oil palm plantations are expanding rapidly. In Cameroon, the petition is presented to institutions promoting oil palm plantations, such as the European Union, United Nations, as well as the embassies of Belgium and France, home countries of several of the oil palm companies active on the continent.
Over the past few years, African countries have been targeted as the new frontier for expansion of industrial oil palm plantations. Estimates are that governments handed over more than 4 million hectares of land in oil palm concessions. This has resulted in negative impacts for local communities. Conversion of community land to industrial oil palm plantations also has created specific and differentiated impacts on women. One of the most terrible impacts resulting from plantations expansion is violence against women. Often, women suffer sexual violence and abuse, the suffering made worse by the fact that these forms of violence are routinely silenced and thus, made invisibilise.
Given this situation, Women from different countries came together to launch the Petition on 8 March, International Women’s Day, as a way to draw attention to this suffering as a result of expansion of large-scale industrial oil palm plantations. In the petition, women denounce that “industrial plantations bring sexual abuse, rape, harassment, persecution and destruction of their livelihood”.
The petition also exposes that when forests are destroyed to make way for plantations, the diversity of food, medicine and material that forests provide, is also destroyed. This destruction eradicates an important part of the economic and cultural values that women depend on and that characterize their traditional land use practices.  Furthermore, rivers are polluted by chemicals used in large-scale plantations, and diseases and other health problems multiply.
The petition notes that children suffer from the consequences: “Livelihoods are drastically affected and women are forced to work as labourers in plantations where their wages are too low for them to be able to pay school fees, compromising their children’s future. Children end up resorting to theft and are regularly thrown in jail. Without decent jobs, even young children are drawn into taking drugs”, the petition says. Alcohol consumption among minors also often increases significantly around industrial plantations.
The petition, signed by hundreds of organizations and individuals from all continents, demands that oil palm companies stop the violence against women and give back community land and forests, which were illegitimately taken through government concessions.
Contacts:
For interviews in French :
In Cameroon : Marie Crescence Ngobo from the Sustainable Development Actors Network (RADD, by its French acronym), phone number: +237 99901984
In Gabon : Danny Bendjet from the organization Muyissi Environnement,  Phone number : +241 02 30 73 19 (Gabon)
For interviews in English, Portuguese or Spanish:
Jutta Kill, World Rainforest Movement, ph: +49 173 6813809
Teresa Perez, World Rainforest Movement, ph: +598 99 614365
Share:
Original source: WRM, RADD
TWITTER
FACEBOOK
WHATSAPP
PRINT
E-MAIL
TWITTER
FACEBOOK
WHATSAPP
E-MAIL