Why France dropped out of the New Alliance for food security 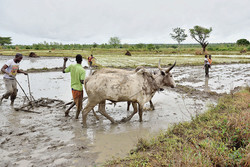 "The current situation for peasant farmers is clearly negative compared to the conditions offered to entrepreneurial farmers – and this gives rise to a strong feeling of injustice,” according to CIRAD’s experts.
Le Monde | 12.02.2018 [FR]

Why France dropped out of the New Alliance for food security

The initiative launched in 2012 to support African agriculture is accused of favouring multinationals and land grabbing.

France announced its withdrawal from the New Alliance for food security and nutrition (NAFSN) at the government’s inter-ministerial committee meeting on international cooperation and development (CICID in French), held on 8 February at Matignon. Launched at the G8 summit in Camp Davis (United States) in 2012, this initiative aims to reduce hunger in Africa and to bring “50 million people out of poverty before 2022” by driving private investments into agriculture through attractive regulatory measures and support from foreign donors. Big corporations such as Cargill, Monsanto, Louis Dreyfus and Mars are associated with this coalition, whose secretariat is jointly run by the World Economic Forum and the African Union.

However, five years after its launch, results are virtually nowhere to be seen. This is according to the French government, which was lead partner for this “new agricultural model” in Burkina Faso, one of the ten countries in the continent which are members of NAFSN. The inter-ministerial communiqué does not expand on the reasons for dropping out, but announces that “France will strengthen its support to family farming through agroecological intensification”. The country is thus officially turning its back to the promotion of large-scale agro-industrial projects as the solution to food insecurity. “The approach of this initiative is too ideological, and there is a real risk of land grabbing at the expense of peasants”, a government official from the Ministry of foreign affairs who is close to the matter explained.

A feeling of injustice

Marie-Cécile Thirion, in charge of the rural development division at the French development agency (AFD, partner of Le Monde Afrique), also admits that “The New Alliance is a missed opportunity which was put together too quickly. It did not really promote useful new investments and it did not prevent bad ones.”

Researchers from the French agricultural research centre for international development (CIRAD, in French) conducted an independent evaluation of the experience in Burkina Faso. Their findings likely convinced French authorities that it was time to pull out. In fact, the conclusions of the report, which was financed by AFD and to which Le Monde Afrique has had access, are severe. “NAFSN in Burkina Faso is a political initiative that has generated much hope and disappointment in certain quarters, as well as fears and criticism. While it was launched at the highest political level, it quickly fell apart because of a lack of ownership. […] Domestic and international companies, which the government was counting on, did not answer the call.”

The report looks closely at the project in Bagré, a city located 200 km southeast of Ouagadougou, the capital of Burkina Faso. “Measures taken to free up land for prospective investors had a serious impact on local food security and consumption.[…] When the local population is granted irrigated land [the project plans to irrigate 30,000 ha, with 5,000 ha going to the villagers], they will need to live without rainfed land, despite the fact that rainfed crops are central to the life of these families. The current situation for peasant farmers is clearly negative compared to the conditions offered to entrepreneurial farmers – and this gives rise to a strong feeling of injustice,” according to CIRAD’s experts.

Issoufou Porgo, the permanent secretary of the Confédération paysanne [Peasant coalition] of Burkina Faso, also describes how damaging this system is for peasants. “The New Alliance does not grant any fiscal benefit to us, but it certainly does to companies who are allocated land to cultivate export-oriented crops. How does this contribute to the country’s food security? Smallholders provide 40 percent of the rice that is consumed in Burkina Faso – they have already demonstrated that they know how to produce.”

Many other failings have been documented by NGOs. For example, in a bid to develop rice production in Cote d’Ivoire, the government encouraged big commodity traders such as Export Trading Group (ETG) to sign contracts with hundreds of smallholders.

“Contracts stipulate that the multinational will provide seeds, inputs, tools and technical advice, which will not be charged until harvest has been delivered,” explains Maureen Jorand of the Catholic Committee against hunger and for development (CCFD-Terre Solidaire). “However, when farmers are unable to deliver the agreed amount of rice, most often due to delays in the delivery of the production services, then the companies can mortgage the land”.

“Brave decision of the government”

The New Alliance has been the target of numerous criticisms from NGOs. It has been accused of favouring giant commodity traders and transnational seed companies, of limiting income for African states by offering tax breaks to foreign investors, of putting peasants’ land rights at risk and, finally, by not improving the situation of the poorest rural communities.

Action contre la faim (ACF), Oxfam and CCFD-Terre solidaire - who had been running campaigns in France for the project to be abandoned – have welcomed what they call “a bold government decision”. “It’s an important step. Other G8 members need to do the same,” urges Peggy Pascal of ACF. Germany and the United Kingdom are currently undertaking their own evaluations. The African Union, which was expected to be the only leader of the initiative, seems to struggle in fulfilling its mandate. No meeting has been organised since 2016.

As for European parliamentarians, they had already decided by voting a resolution on 7 June 2016 in which they demanded any new support to NAFSN be stopped and an evaluation be conducted. Lawmakers decried the lack of consultation of African civil society before launching the initiative. They warned against “the danger of replicating in Africa the ‘Asian Green Revolution’ model of the 1960s, ignoring its social and environmental impacts.” One question remains unanswered at this point: how to massively attract “good” investments to modernise agriculture in a continent where grain yields are two times below the world’s average and the population is expected to double by 2050?