Public Note: In the Cerrado of Piaui, Brazil, communities suffer violations and lose their land 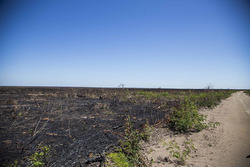 Public Note: In the Cerrado of Piaui, Brazil, communities suffer violations and lose their land
The entities that make up the Articulation of the Populations Impacted by Matopiba and the National Campaign in Defense of the Cerrado, supported by national and international movements and organizations, are once again publicly denouncing the alarming increase in violence and violations of rights of the communities in the Cerrado in Piauí, part of the region where the federal government is implementing its Matopiba Agricultural Development Plan (MATOPIBA PDA).
Since last year, traditional communities in the municipalities of Baixa Grande do Ribeiro, Santa Filomena, Gilbués and Bom Jesus have been living under strong threats and various types of violence. Armed groups have threatened leadership and community dwellers struggling against large agribusiness ventures in the region.
In September 2017, for example, entities that subscribe to this note had already denounced the death threats suffered by Mr. Adaildo Alves da Silva, who is being pressured to leave the land he has occupied for years, in the municipality of Gilbués. In December, officials from the region's agricultural companies visited the communities and questioned them about the Matopiba International Caravan held in September in the region. Last week, Adaildo and members of the Morro D'água community were approached by two armed men who, according to the workers themselves, were in the service of the alleged owner of the farm, Bauer Souto Santos.
Pressed by the State and Federal Public Prosecutor's Office, the Civil Police went to the Salto Community to investigate the threats, but did not make any arrests and refused to look for the gunmen. The investigation did not advance in any way. In the very act of recording an Occurrence Bulletin, the police's total lack of awareness of the violence faced by the communities was evident, making it difficult for community members to record their complaints.
The expansion of agribusiness in the Cerrado do Piauí is funded by financial investments of foreign pension funds, such as TIAA, from the United States, which has speculated in real estate acquired illegally by entrepreneurs and farmers. But it is on these pieces of ground, like the Salto Community, that men and women have lived for years, and they use the lowlands and the bluffs to plant and raise their animals - spaces of life that have been taken by force by the "projectors", as the land grabbers are called by the communities.
In order to verify and denounce violations of human rights and violence suffered by rural communities in the southern region of Piauí, the Matopiba International Caravan (composed of members of Brazilian and international organizations and movements, researchers and journalists) visited affected communities over eleven days in September 2017. After the caravan representatives of Brazilian organizations, such as the Pastoral Land Commission (CPT), FIAN, and the Social Network of Justice and Human Rights, visited countries in Europe and the United States to publicize the situations encountered by the Caravan in Piauí. Complaints have been made, for example, to representatives of European governments and the European Parliament. In the USA, a seminar on the problem at New York University took place. And the Matopiba International Caravan Report will be released later this semester.
In addition to increasing foreign investment in Piauí, the Land State Regularization, proposed in Law 6709/2017, further aggravates this conflictive situation, since it disregards the territory where the communities live, and privileges individual titles and the regularization of land soon after being invaded by farmers and companies. We remind you that this regularization process is financed by the World Bank.
The peoples and communities of Piaui, as well as the organizations and social movements that accompany them, have made innumerable national and international denunciations, however, it is noticed that the absence of the Brazilian State in the prevention and resolution of agrarian conflicts contributes to the increase of violence and to legitimize the criminal actions of farmers and companies.
Given this scenario, we express our solidarity and support to threatened communities struggling to defend their territories. We demand immediate actions by public authorities to prevent further announced deaths of peasants. We also demand that the Agrarian Branch of Piauí, the Institute of Land of Piauí (Interpi) and the Nucleus of Land Regularization of the General Corregedoria of Justice of Piauí review Law 6,709 / 2017. This review process should have wide participation of impacted communities, as guaranteed by the ILO Convention 169, as well as guarantee that land be allocated to the communities that have lived in these territories for many years.
Brasília, February 22, 2018.
Associação de Advogados de Trabalhadores Rurais no Estado da Bahia (AATR/BA)
ActionAid Brasil
Associação Agroecológica Tijupá
Alternativa para a Pequena Agricultura no Tocantins (APA/TO)
Cáritas Brasileira
Cáritas Regional Piauí
Comissão Pastoral da Terra (CPT)
Confederação Nacional dos Trabalhadores na Agricultura (Contag)
Coordenação Nacional de Articulação das Comunidades Negras Rurais Quilombolas (CONAQ)
Conselho Indigenista Missionário (Cimi)
Conselho Pastoral dos Pescadores (CPP)
Conselho Nacional de Igrejas Cristãs do Brasil (CONIC)
Coletivo Acadêmico de Educação do Campo/PI
Escola de Formação Paulo de Tarso
Federação da Agricultura Familiar do Piauí (FAF-PI)
Federação dos Trabalhadores na Agricultura do Estado do Piauí (FETAG-PI)
Federação de Órgãos para Assistência Social e Educacional (FASE)
FIAN Internacional
FIAN Brasil
Grassroots International
Grupo de Estudos sobre Geografia, Território e Sociedades, do Instituto Federal de Educação, Ciência e Tecnologia (IFMA)
Grupo de Estudos sobre Mudanças Sociais, Agronegócio e Políticas Públicas (GEMAP) do Programa de Pós-Graduação de Ciências Sociais em Desenvolvimento, Agricultura e Sociedade (CPDA/UFRRJ)
Grupo de Pesquisa ReExisTerra – Resistências e Reexistencias na Terra (NAEA/UFPA)
Instituto Sociedade, População e Natureza (ISPN)
Instituto Políticas Alternativas para o Cone Sul (PACS)
Maryknoll Office for Global Concerns
Movimento dos Pequenos Agricultores (MPA)
Movimento dos Pescadores e Pescadoras Artesanais (MPP)
Movimento dos Trabalhadores e Trabalhadoras do Campo (MTC)
Núcleo de Agroecologia e Educação do Campo (GWATÁ/UEG)
Obras Kolping/PI
Rede Social de Justiça e Direitos Humanos
Rede de Mulheres Negras para Soberania e Segurança Alimentar e Nutricional (Redessan)
Serviço Pastoral do Migrante (SPM)