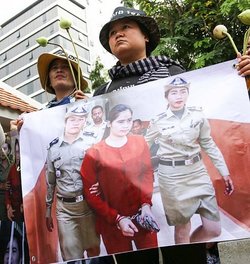 Protesters hold portraits of land-right activist Tep Vanny in front of the Supreme Court during a demonstration demanding her release on bail, in Phnom Penh, Cambodia.
In the fight for land and to protect the environment, communities around the world are struggling against governments, companies and criminal gangs.

A forest ranger, a police officer and a worker with the non-profit Wildlife Conservation Society were shot dead last week in a wildlife sanctuary in Cambodia's northeast, an area known for the illegal logging of timber.

The killings are "symptoms of a sustained campaign by state officials against Cambodians who take a stand against rampant illegal logging," said Emma Burnett of the advocacy group Global Witness, which has documented similar incidents in recent years.

The illicit trade in timber "is destroying the lives and livelihoods of indigenous and forest-dependent communities," she said in an e-mail.

"Public officials must be on the side of forest defenders, not killing them," Burnett told the Thomson Reuters Foundation.

In the fight for land and to protect the environment, communities around the world are struggling against governments, companies and criminal gangs that exploit resources including timber, minerals and palm oil.

Agribusiness overtook mining as the industry most responsible for the murder of activists last year, according to Global Witness. The UK-based group recorded 197 deaths of defenders of land and environment in 2017.

Violent confrontations in Southeast Asia have risen in recent years, with the Philippines recording the highest number of casualties amidst a government crackdown on rural communities, according to a separate report.

In Indonesia, policemen employed by a subsidiary of commodities firm Wilmar International, shot at and wounded two farmers on a palm oil plantation in December, according to a coalition of rights groups.

The group of nearly 60 indigenous and farmers' organisations said that farmers have been locked in a battle with the plantation for years, because their land was taken without their consent or compensation.

"The state failed to be present to protect its citizens and instead let law enforcement become corporate shields," the coalition said in an open letter to RSPO.

A Wilmar spokeswoman said the case was not related to a land claim, and that the company's security officers were investigating a theft when the shooting occurred.

She denied that Wilmar had hired policemen as security, and said that the company had instead called police to the plantation.

Police officers then fired rubber bullets at a suspect's leg when he ignored their warning to stand down, said the spokeswoman in an email.