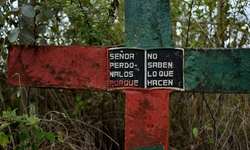 A cross on the side of the road painted in the colours of the Nasa indigenous people, reads, “Lord forgive them, fore they know not what they do.” Miranda, Cauca, Colombia. (Photo: Tom Laffay for the Guardian)
The Guardian | 2 February 2018

The slaughter of people defending their land or environment continued unabated in 2017, with new research showing almost four people a week were killed worldwide in struggles against mines, plantations, poachers and infrastructure projects.
The toll of 197 in 2017 – which has risen fourfold since it was first compiled in 2002 – underscores the violence on the frontiers of a global economy driven by expansion and consumption.
“The situation remains critical. Until communities are genuinely included in decisions around the use of their land and natural resources, those who speak out will continue to face harassment, imprisonment and the threat of murder,” said Ben Leather, senior campaigner for Global Witness.


But there was a glimmer of hope that after four consecutive increases, the number of deaths has flattened off, amid growing global awareness of the crisis and a renewed push for multinational companies to take more responsibility and for governments to tackle impunity.
Most of the killings occurred in remote forest areas of developing countries, particularly in Latin America where the abundance of resources is often in inverse proportion to the authority of the law or environmental regulation.
Extractive industries were one of the deadliest drivers of violence, according to the figures, which were shared exclusively with the Guardian in an ongoing collaboration with Global Witness to name every victim.
Mining conflicts accounted for 36 killings, several of them linked to booming global demand for construction materials.
In India, three members of the Yadav family: Niranjan, Uday and Vimlesh, were murdered last May as they tried to prevent the extraction of sand from a riverbank by their village of Jatpura.
In Turkey, a retired couple, Ali and Aysin Büyüknohutçu, were gunned down in their home after they won a legal battle to close a marble quarry that supplied blocks for upscale hotels and municipal monuments.
The hunger for minerals was also blamed for turning the Andes into a “war zone” with high-profile conflicts between indigenous groups and the owners of Las Bambas copper mine in Peru and El Cerrejón coal mine in Colombia.
Agribusiness was the biggest driver of violence as supermarket demand for soy, palm oil, sugarcane and beef provided a financial incentive for plantations and ranches to push deeper into indigenous territory and other communal land.


With many of the tensions focussed in the Amazon, Brazil – with 46 killings – was once again the deadliest country for defenders. Relative to size, however, smaller Amazonian neighbours were more dangerous.
Colombia suffered 32 deaths, largely due to an uptick of land conflicts and assassinations in the wake of the 2015 peace deal, which left a power vacuum in regions previously operated by Farc guerrillas. Among the most prominent victims was Efigenia Vásquez, a radio and video journalist from the Kokonuko community who was shot during a protest “to liberate Mother Earth”.
Peru witnessed one the worst massacres of the year in September when six farmers were killed by a criminal gang who wanted to acquire their land cheaply and sell it at a hefty profit to palm oil businesses.
Gangs and governments were largely responsible for the bloodshed in the second and fourth countries on the list: Mexico with 15 killings (a more than fivefold rise over the previous year), and the Philippines, which – with 41 deaths – was once again the most murderous country for defenders in Asia.
A broader crackdown by the country’s president, Rodrigo Duterte, was a key factor. When his soldiers massacred eight Lumad in Lake Sebu on 3 December, the government claimed they died in a firefight with rebels, but fellow activists insisted they were killed for opposing a coal mine and coffee plantation on their ancestral land.


In Africa, the greatest threat came from poachers and the illegal wildlife trade, particularly in the Democratic Republic of Congo where four rangers and a porter were ambushed and killed in July. But the highest profile victim last year of the poaching conflict was Wayne Lotter, an influential conservationist who was murdered in Tanzania after receiving death threats.
Global Witness believe many more murders go unreported. Defenders are also being beaten, criminalised, threatened or harassed. In a recent example, Ecuadorean forest activist Patricia Gualinga reported last month that attackers had thrown rocks through her windows and yelled death threats at her.
This is common. The EU-funded Environmental Justice Atlas has identified more than 2,335 cases of tension over water, territory, pollution or extractive industries, and researchers say the number and intensity are growing.
Justice is rare. The assassins are often hired by businessmen or politicians and usually go unpunished. Defenders, who tend to be from poor or indigenous communities, are criminalised and targeted by police or corporate security guards. When they are killed, their families have little recourse to justice or media exposure.
But there are patches of progress. Some countries saw falls, notably Honduras and Nicaragua, though activists remain in a vulnerable situation.
Civil society groups and international institutions are also increasingly mobilising behind environmental rights. Last month, 116 organisations in the Philippines launched a petition declaring: “It is not a crime to defend the environment.”
Campaigners for indigenous communities have taken their struggle to global climate talks and the United Nations.
Some international institutions are willing to listen. Following criticism for having backed the Honduran hydro project linked to the murder of activist Berta Cáceres, the Dutch Development Bank (FMO) has broken ground by declaring the safety of human rights defenders to be a key factor in future investment decisions. “The time has come for more investors to step up and take measures which guarantee that their money isn’t fuelling attacks against activists,” said Leather.
The UN special rapporteur on human rights and the environment, John Knox, urged governments to address the culture of impunity and said the media had an important role in boosting transparency.
“Environmentalists have been at risk for many years, but the full extent of the global crisis has only become clear as a result of the work of Global Witness and the Guardian to identify every environmental defender killed because of their work,” Knox said.
“As a result, it’s possible to see more clearly the underlying causes and risk factors, including the failures of governments to protect these defenders from threats and violence. I think that there are some signs that governments are starting to respond to the increasing international attention to these cases, but much more needs to be done.”
Original source: Guardian
TWITTER
FACEBOOK
WHATSAPP
PRINT
E-MAIL
TWITTER
FACEBOOK
WHATSAPP
E-MAIL