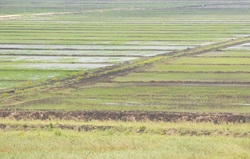 
Chinese companies invest in agriculture in Mozambique
A joint venture between Chinese companies Power China International Group Ltd and Xinjiang Production and Construction Corp. plans to make use of 3,000 hectares of irrigated land in Chókwé, southern Mozambique in the current agricultural season, the Mozambican newspaper Notícias reported recently.
The chairman of the board of the Chókwè Hydraulic Facility told the newspaper that Chinese investors also want to modernise the irrigation system in an area of 1,500 hectares, particularly focussing on growing corn and beans.
Soares Xerinda added that the project had already been submitted to the Ministry of Agriculture and Food Security in May last year, and is now waiting for approval.
The chairman of the state company founded in 1997 added that the board is working to attract domestic and foreign private investors to contribute “to the transfer of production technologies, land levelling, and installation of machine parks, among other major initiatives.”
Xerinda added that Green 2000, a mixed capital company, will level land and participate in seed production and fish farming and that Agrotech will focus on technical assistance, financing to farmers, as well as production of corn for feed.
In 2017 producers in the Chókwé irrigated area produced more than 100,000 tons of crops, after the previous season was affected by severe drought that was made worse by a lack of water for irrigation.

Chókwè irrigation opens up to private investors
By Virgínia Bambo

To fully exploit the potential of the Chókwé irrigation system, Chókwè Hydraulics (HICEP), the entity responsible for the management of the undertaking, is working to attract new domestic and foreign private investors with knowledge and capacity in the transfer of production and land levelling technologies and the installation of machinery, among other initiatives.
HICEP chairman Soares Xerinda told Notícias that a joint venture between China Power and Bing Tuan intends to rehabilitate 3,000 hectares for the current agricultural season and to modernise the irrigation system over an area of 1,500 hectares for greater efficiency and higher yields, particularly of maize and beans.
The partnership will extend to the provision of mechanised services, technology transfer and institutional training to HICEP. The project was prepared and submitted to the Ministry of Agriculture and Food Security in May last year, and is in the process of being processed for approval, Xerinda says.
Green 2000, a mixed capitals company, will level land and participate in seed production and fish farming. Agrotech, another partner called in to help make irrigation more profitable, will provide technical assistance and easier financing to farmers as well installing machinery and supporting fish production.
Chókwé irrigation producers are reported to have grown more than 100,000 tonnes of crops last year. The previous season was characterised by severe drought, with little water for irrigation.
The return of normal water supply has created new momentum for farmers and other stakeholders in the value chain, and provided encouraging agricultural results.
In their search for financial self-sufficiency, HICEP managers are themselves working on their own production of corn, vegetables and beans.
As a result of the recent acquisition of a rice processing unit from MIA in partnership with the private sector, rice production will come to the fore this year.