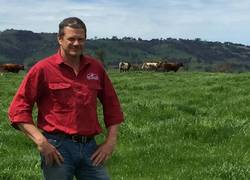 One of the people most active in driving Chinese investment in Australian farmland, David Goodfellow, is switching camps to help build a $1 billion Canadian investment portfolio.

The Canadian fund made headlines last month when it finalised its purchase of West Australian avocado business, Jasper Farms, after winning a bidding war against prominent listed horticulture producer and marketer, Costa Group, and another overseas bidder.

Rifa Salutary, the agricultural business of China’s Zhejiang Rifa Holding Group, has been led by Mr Goodfellow since 2014 and now boasts about 50,000 hectares of grazing and cropping country in NSW and Victoria.

Rifa’s rural activities began with the 2500ha western Victorian property “Blackwood”, near Penshurst, and include 22,000 cattle, a similar number of sheep and 4000ha of cropping over five holdings, including the big 28,300ha “Cooplacurripa” beef aggregation west of Gloucester on NSW’s Mid North Coast.

AustOn intends expanding its Canadian parent fund’s 2015 and 2016 moves into almond production in South Australia and Victoria, and the Jasper Farms purchase at Busselton in southern WA.

OTPP is Canada's largest single-profession pension fund with assets totalling more than $180 billion, including farming investments in California and South America, and a stake in Australian infrastructure and shopping centres.

Mr Goodfellow, who starts work as chief executive officer on Februay 1 establishing a Melbourne base for AustOn, has been charged with further diversifying OTPP’s local interests into at least two other farming categories.

The fund has already spent about $400m on its almond and avocado moves and now expects expand its Australian agricultural asset base by a further $600m before 2022.

“They have an open mind about what industries are best,” Mr Goodfellow said.

“Grain, livestock or more horticultural opportunities are all potential prospects – it’s my job to identify where to move next.”

Any decision to invest in livestock or cropping would be on a significant, multi-property scale over a broad geographic base to mitigate against seasonal risks.

The past year highlighted the advantages of Rifa’s strategic spread of land acquisitions.

“In 2017 our breeding and fattening strategy was well rewarded, particularly in Victoria where we had more grass than you could climb over,” he said.

“When conditions dried off in the north we moved cattle south, and actually took advantage of the dry season by buying more stock as they came on the market.”

It has been one of several Chinese corporate investors making a splash in the Australian farm sector in recent times.

“The Canadians see Australia as a good fit for them – a great opportunity in need of outside investment,” he said.

“We also share many similar business and cultural characteristics.”

“It’s a bit sad there aren’t a lot of good stories about Australian investment in the ag sector, especially when you consider I started Rifa with a clean sheet of paper and we’ve made a lot of money for Chinese shareholders which might otherwise have gone to Australian investors,” said Mr Goodfellow.

Establishing Rifa Salutary had been “one of the great privileges” of his a career which has also included developing farmland portfolios for Macquarie Bank and Victoria’s Baillieu family and running Elders’ branch network.

“I wanted to learn much about the role of the Chinese in the future of our industry, and I’m grateful for the opportunity given to me,” he said.

Rifa’s chairman, Jie Wu, said Mr Goodfellow had made good choices in purchasing valuable properties, developing a strong team and setting “a solid foundation for the continuing growth of the company”.

Mr Beale confirmed that having already spent about $150 million buying farmland and on infrastructure upgrades such as water, fencing, access roads and pasture improvement, Rifa was still on the hunt for more holdings.

He said the new CEO would make the call on expanding the footprint outside NSW and Victoria.