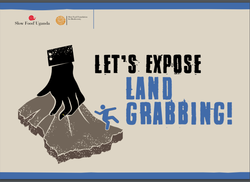 After the press conference held today in Mukono (Uganda), Slow Food has officially launched the campaign 'Our Future is in Danger: Stop Land Grabbing!' The campaign aims to raise awareness about land grabbing* and its consequences among the population and stimulate political debate at all levels, from civil society to local authorities and Parliament. The campaign will run for several weeks in the first quarter of 2018 in different districts of Central and Eastern Uganda, and its program will be regularly updated on the Slow Food Uganda website and Facebook page.

Due to land grabbing, native forests and local biodiversity are being lost, people are being evicted from their homes and forced to give up their lands, along with all the other problems linked to the large-scale use of pesticides and chemical fertilizers. Some individual cases are reported in the booklet 'Let's expose Land Grabbing' published by Slow Food and available for free download on the Slow Food Foundation for Biodiversity website. Slow Food projects in Uganda aim to empower local small-scale food producers and aid them in their fight against land grabbing.

Slow Food's aim is to preserve the rich biodiversity of the country, so that on one hand different local products can continue to be grown and consumed by local communities, and, on the other hand, to keep the soil rich with different local crops, which is essential for the productivity of the land. Slow Food has recently launched the Lira-Amach Earth Market, the third Earth Market in Uganda, which allows small-scale farmers and producers to sell their products directly to consumers in an area which is afflicted by land grabbing and providing a lifeline to these producers.

Slow Food Uganda and the Food Rights Alliance are planning to participate in the National Land Debate organized during the Annual Land Awareness Week (end of January 2018) by the Ministry of Lands, Housing, and Urban Development to explain the campaign.

Uganda has been affected by land grabbing for more than a decade. All the affected areas in Uganda are known for their rich biodiversity, important cultural legacy, and as food baskets. It takes place with different purposes, such as:

• Agribusiness: the primary reason, whereby big pieces of land are grabbed to grow profitable crops like sugarcane, palm oil, rice, sunflowers, or to be used for intensive animal farming.

• Carbon market: where extensive plantations of exotic trees like pine or eucalyptus are established in exchange for carbon credits for large foreign firms. (Under the Kyoto Protocol, developed countries can offset their carbon emissions by buying carbon credits from projects in the developing world through the so-called Clean Development Mechanism (CDM)).

• Land speculation: this is more linked to local investors who - thanks to their proximity to local politicians and insider knowledge of development projects - buy land at below-market prices from small-scale farmers and then sell it on for profit.

*Land grabbing is the acquisition (lease, concession, outright purchase) by corporations or states of large areas of land on a long-term basis (often 30 to 99 years). One of the consequences of land grabbing is the loss of biodiversity, because land grabbed is mostly used for monoculture of crops or trees; in addition, land grabbing is made without any public consultation and the local people don't have a say, so land grabbing is an important sign of lack of democracy. Moreover, most of the time, the land is grabbed from the farmers and then used to grow products for export: this takes power away from people and denies them the opportunity to choose the food system they want and is thus a big threat to food security.

In the project 'Slow Food and the Terra Madre Network in Uganda: Defeating Rural Poverty Through the Protection and Promotion of Local Food Biodiversity', Slow Food Foundation for Biodiversity and Intesa Sanpaolo are working together to develop the Slow Food network in Uganda. In particular the project aims to create agro-environmental gardens to enable the protection of local foods and improve the food security of local communities; identify products at risk of extinction to be safeguarded in the Ark of Taste; support specific products and groups of producers who make these products through the creation of Slow Food Presidia; support the sale and promotion of products through small local initiatives and the creation of Earth Markets; raise awareness both locally and internationally on issues related to food production.

Slow Food is a global grassroots organization that envisions a world in which all people can access and enjoy food that is good for them, good for those who grow it and good for the planet. Slow Food involves over a million activists, chefs, experts, youth, farmers, fishers and academics in over 160 countries. Among them, a network of around 100,000 Slow Food members are linked to 1,500 local chapters worldwide, contributing through their membership fee, as well as the events and campaigns they organize. As part of the network, more than 2,400 Terra Madre food communities practice small-scale and sustainable production of quality food around the world.