Why the University of Illinois is investing in farmland 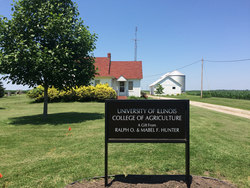 By Janet Lorin
Early in Ellen Ellison’s tenure as chief investment officer for the University of Illinois Foundation, she and some staff toured a university-owned farm in Monticello, 30 miles west of the flagship Urbana-Champaign campus. Ellison was impressed by the complexity of a GPS-outfitted planting machine, which was able to track the variety of seeds used, measure their depth in the soil, and record the exact number of them planted per acre.
Ellison is aiming to make farmland about 10 percent of the $1.8 billion endowment portfolio she oversees. Separately the university manages an additional $800 million, which also includes farms. That might seem like an obvious play for a big Midwestern school—similar to the University of Texas System’s getting money from oil. According to campus lore in Urbana, the undergraduate library was built underground in part to avoid casting a shadow on an historic experimental cornfield. But few universities are committed to building up their ag holdings the way Illinois is. For a public university in a state with budget woes, “you’re always looking for new and creative ways to skin a cat,” Ellison says. “I feel my conduit is agriculture.”
Part of the strategy is to draw more gifts of land. The university already owns almost 17,000 acres of donated farmland, dotted across 25 counties in central Illinois, planted mostly with corn and soybeans. Starting in 2005 a controversial university policy required tenant farmers to bid on their lease contracts every three years. The move was unpopular in the state’s farming communities, and land donations dropped more than 80 percent below the average of the preceding 15 years. Ellison and the new dean of the school’s College of Agricultural, Consumer, and Environmental Sciences, Kimberlee Kidwell, working with school officials, got the policy changed in September so the university can consider factors besides the rent, such as how long a tenant has been working the land. It’s too soon to say how big an effect this will have, but Kevin Noland, who oversees real property for the foundation, says it’s seen more interest from people considering farmland gifts.
As a financial asset, land has done well for U of I. Despite weak gains in the past few years, the holdings have generated an average 10.2 percent annual return over the past decade, more than double the 4.7 percent return of the whole portfolio. They also provide some diversification. When the endowment’s investments were down 20 percent during the financial crisis, farmland was up 10 percent. Justin Ourso, managing director of Nuveen Natural Resources, part of money management company TIAA, says farmland can be an inflation hedge. “The end product is a necessity, not a luxury,” he says. The risks: Climate change could wreck harvests, and farmland isn’t a liquid asset—it could be hard to get a good price if the university ever needs to sell in a cash crunch.
Ellison says she wants to build on the example of Stanford’s success with venture capital, leveraging the expertise of Illinois alumni and professors, including those from its renowned ag school. “Let’s do what we actually know about,” she says. “We have a means of sourcing new ideas long before everyone else is paying attention.” In addition to land, the portfolio invests in agriculture-related private equity. Ellison recalls one alum who wanted her to make a venture capital investment in a cow—just one cow—that would produce more milk. In that case, she declined.
Similar institutions with deep agricultural roots are more cautious about holding farmland as a strategic investment. “We don’t feel we have the expertise to manage it,” says Brian Neale, who oversees investments for the $1.2 billion endowment of the University of Nebraska Foundation. The Lincoln-based foundation is exploring some agriculture investments via private equity; Neale says he’s considering an investment in a California almond farm.
One other school with significant farm holdings is Whitman College, a 1,400-student liberal arts school in Walla Walla, Wash. Its endowment manages 24,000 acres near its campus, including 15 farms that grow peas, garbanzo beans, canola, and three types of wheat, says Justin Rodegerdts, manager of investments. Some of the garbanzos end up in Sabra hummus, and much of the wheat goes to Asia. Agricultural revenue contributes about $1.6 million annually to help operate the school. On one 6,000-acre farm, soft white wheat—used to make confectionery items such as cookies—grows next to some wind farms that also generate returns.
“We have access to a lot of experts in wheat farming and wheat management,” Rodegerdts says. “Having them on our farm committee helps us govern and hire good farmers that take care of this land. It’s been a good financial return for the college, which is a double win.”