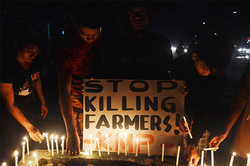 Farmers from the Philippines’ southern island of Mindanao held a candle lighting activity in front of the national agrarian reform ministry in the country’s capital region to demand an end to the alleged extrajudicial killings of Filipino farmers (Photo: Abby Valenzuela, PANAP)

Twenty-seventeen is yet another year of continuing and intensifying attacks against rural communities that are asserting their right to land and resources. PAN Asia Pacific (PANAP), through the reports of our partners and networks and based on our regular monitoring of news and developments, has recorded a total of 142 cases of human rights violations related to land conflicts and struggles in 21 countries from various regions covering the period January 1 to November 30, 2017. These cases include politically motivated killings of farmers, farmworkers, indigenous peoples as well as activists and supporters who closely work with the affected rural communities. The recorded cases also include various forms of repression such as arrest, detention, legal persecution, threats, harassment, and physical assault, as well as displacement.

During the said period, PANAP has monitored 73 cases of land-related killings that claimed the lives of 116 individuals, 71 of whom were farmers and farmworkers; 23 were land activists; and 21 were indigenous peoples. Of the total number of victims, 100 or 86% were men, while 12 or 10% were women. Most cases of killing were recorded in the Philippines and Brazil. Meanwhile, there were also 43 cases and 266 victims of arrest, detention, and legal persecution monitored. In terms of threats, harassment, and physical assault, PANAP monitored 17 cases and 45 victims.

Alarmingly, global and regional developments that create conditions for greater land and resource grabbing continue to emerge and fuel social conflicts and unrest in the rural areas. In recent years, for instance, one of the major developments that has been driving land and resource grabs in the region is the so-called Belt and Road Initiative (BRI). A centerpiece program of China, the BRI is being dubbed as the “biggest overseas investment drive ever” and the “only large-scale multilateral development project in the twenty-first century”. At present, the BRI reportedly involves about 900 ongoing and planned projects worth US$ 890 billion. The whole initiative so far includes 65 countries with investments said to reach possibly several trillions of dollars (estimates range from US$ 1 trillion to as much as 5 trillion) in the coming years. China has been on the offensive raising the global profile of the BRI and consequently of its sponsor. Last May,China hosted 29 heads of states, and representatives from more than 130 countries and 70 international organizations to sell the BRI.

As part of the BRI, China plans on establishing “international agricultural parks” in 10 countries. Three of those identified by Chinese authorities include an agriculture technology park in Laos, an agricultural products processing zone in Zambia, and a fisheries park in Fiji. While unclear if it is part of the 10 agricultural parks, a Chinese firm is also reportedly investing US$ 2 billion to develop Cambodia’s first special economic zone (SEZ) intended exclusively for agricultural processing and storage. While the parks themselves may require a relatively small portion of land (although still sizable especially in small countries with big rural population and landless people), the Chinese agroindustrial firms that plan to use them would demand massive areas. The agricultural SEZ in Cambodia, for instance, will be constructed on a 100-hectare land. Meanwhile, a Chinese company, one of the 17 that will use the SEZ, will develop 2,000 hectares of land near the agricultural park for pepper and chili production.

Based on data from the Land Matrix, a global and independent initiative monitoring transnational land deals, China has been involved in about 2.23 million hectares of land deals worldwide from 2000 to 2014. Note that almost all of these deals were made pre-BRI that was officially launched only in 2013. These are mostly land lease/concession deals for the production of food crops, livestock, biofuels, and other non-food agricultural commodities as well as tourism and energy. Many are in the Mekong region (i.e., Cambodia, Laos, and Vietnam) but also in several African and Latin American countries. In Cambodia, for instance, China accounts for around a fifth of economic land concessions (ELCs) – land leases for private firms and individuals involved in agriculture and agriculture-based industries. Chinese firms hold ELCs for sugar, rubber and palm oil plantations covering about 400,000 hectares out of Cambodia’s recorded 2.1 million hectares of total ELCs. Everywhere in the Mekong region, China has been constructing hydropower dams, physically and economically dispossessing tens of thousands of people.

The continued rule of repressive regimes create the environment of impunity in violating the human rights of the rural peoples and small food producers in order to pave the way for corporate, including foreign, interests to take over lands and resources. In the incidents that PANAP has monitored, state security forces – including the military, police, and paramilitary – have been implicated in seven (7) out of every 10 cases of human rights violations. In countries where human rights violations have been already been rampant for years like the Philippines, for instance, the incidents of killings and other forms of repression targeting farmers, indigenous peoples and land activists and supporters have spiked dramatically this year.

Massive displacement of rural communities – including those carried out through military operations under the guise of counterinsurgency and national security or counter-terrorism – to clear lands for corporate plantations, big mining firms, economic zones, transport, energy, and other large infrastructure projects to serve foreign markets and interests continue. Some analysts have raised the point that the Rohingya crisis in Myanmar is not simply due to religious conflict but is actually part of a systematic military campaign to clear lands for foreign investments. Note, for example, how the Myanmar government has significantly expanded the area of agricultural lands in the Rakhine State intended for corporate investments immediately before the recent spate of conflict. From just 17,000 acres (6,880 hectares) in 2012, the government increased the area of Rakhine’s rural land included in the national list of land allocations intended for “economic development” to 3 million acres (1.21 million hectares) in 2016. That’s a 176-fold increase in land allocation for private capital that unfortunately comes at the expense of the Rohingyas and other poor rural people in Rakhine who are also being driven away from their lands.