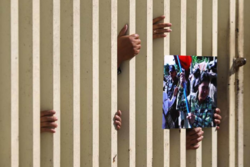 A portrait of land-right activist Tep Vanny is seen at the gate of the Supreme Court during a demonstration demanding her release on bail, Phnom Penh, Cambodia, January 18, 2017. (Photo: REUTERS/Samrang Pring)
Reuters | 6 December 2017
Women land defenders in Asia need more protection as violence rises - rights groups
by Rina Chandran
MUMBAI, Dec 6 (Thomson Reuters Foundation) - Women land rights defenders in Asia are at greater risk of violence and harassment, according to rights groups who are calling on authorities to do more to protect them as conflicts over land and resources get increasingly bloody.
At least 200 people were killed in 2016 defending their homes, lands and forests from mining, dams and agricultural projects, making it the deadliest year on record with numerous cases of women killed in Asia and Latin America.
"In many cases, the killing of defenders were preceded by a series of threats which authorities turned a blind eye to. Lives could have been saved if states had acted," said Asmita Basu at Amnesty International India.
"Authorities must publicly support their work, and take all necessary measures to prevent further attacks on them, and bring to justice those responsible. Crucially, they must send a clear message that these violations will not be tolerated."
Amnesty said in a report on Tuesday that women face "specific forms of gender-based violence in addition to the attacks other defenders may face, including sexual violence, smears and defamation campaigns".
This is particularly the case in highly patriarchal societies, with India, the Philippines and Cambodia among the deadliest for women activists, it said.
In Cebu in the Philippines, armed men killed Elisa Badayos, a coordinator with the rights coalition Karapatan, and a male colleague last month as they investigated land rights violations, according to advocacy group Frontline Defenders.
The two campaigners had gone to a police station earlier in the day to report harassment by armed men, it said.
In Thailand, women activists have faced more violence since a May 2014 coup, a report earlier this year said.
And in Cambodia, women - through whom land is bequeathed under local law - are leading the fight for land rights and bearing the brunt of any crackdowns.
In Papua New Guinea, a decades-long conflict over one of the world's largest open pit mines has destroyed the land and the environment, and fractured the matrilineal tradition, said Helen Hakena, head of the Leitana Nehan Women's Development Agency.
"We now live with some of the highest rates of violence against women. Women still face immense aggression from the conflict of resources on our land," she said in a statement.
In India, women defenders face added pressure from their family and community, said Basu, Amnesty's programmes director.
"Far from being recognised and protected by the state, they are demonised and portrayed as criminals and 'anti-nationals', which encourages further abuses," she told the Thomson Reuters Foundation. (Reporting by Rina Chandran @rinachandran. Editing by Belinda Goldsmith and Katy Migiro. Please credit the Thomson Reuters Foundation, the charitable arm of Thomson Reuters, that covers humanitarian news, women's rights, trafficking, property rights, climate change and resilience. Visit news.trust.org to see more stories.)