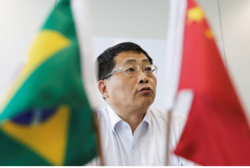 
Since 2016, Dakang has gained capacity to handle around 5 million tonnes of grains per year by partnering with two firms that barter goods and services for soybeans and corn in the two largest producing states in the country, Mato Grosso and Paraná.

After Dakang integrates those acquisitions, a process expected to take three years, the company will look for targets in the beef industry, Chairman Ge Junjie said in an interview.

“Our current thinking is that the next step on the grain trade side after buying the two companies, we have to get them in order. Regarding beef, we’re not doing it temporarily but we’re still very interested,” Ge said, speaking in Chinese

“It’s just like already having two Brazilian children; we (first) have to raise them right,” Ge said.

The company would aim to acquire beef slaughterhouses that are already approved to export to China, Ge said.

Chinese investment has flooded into Brazil in recent years, with $14 billion in deals in the first nine months of 2017 alone, the second best year since the Brazilian government began monitoring in 2003.

While energy and mining deals have dominated, the world’s most populous country is increasingly looking to Brazil’s vast territory to feed its citizens.

State-owned enterprises account for 70 percent of investments since 2003, but Ge said Dakang has an advantage in being an early mover among non-government controlled companies.

Dakang’s Brazil business is already larger than any other country where the firm operates and will remain its principle focus, Ge said.

That would still leave the company short of a 20 million tonne target by around 2021. Brazil is expected to export roughly 66 million tonnes of soy alone this year.

Dakang will integrate Fiagril and Belagricola by orienting their sales of soybeans toward China while selling more Chinese pesticides and other products to farmers in Brazil.

(In paragraph 11, corrects company name to Fiagril Ltda, not Fiagril Participacoes SA, and corrects timing of Belagricola acquisition to earlier this year, not in May)