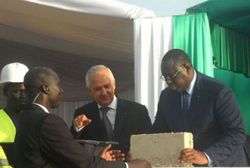 Anas Sefrioui and the Senegalese President, Macky Sall at the inauguration of the project.
Yabiladi | 28 November 2017

Senegal: Macky Sall cancels a land allocation for Afri Partners owned by Anas Sefrioui
The Senegalese president has finally given in to the pressure put by villagers who opposed the granting of 10,000 hectares to Afri Partner, a company owned by Moroccan businessman Anas Sefrioui. Macky Sall has decided to cancel a land allocation expected to be used for agricultural projects (rice cultivation) in the municipality of Dodel (northern Senegal), says Afriquemidi online newspaper.

The company’s withdrawal was announced by «the Delegate Minister in charge of the Budget, Birima Mangara,» said the same source.

On August 28, the villagers had appealed to the Senegalese Supreme Court against the decision to allocate the 10,000 hectares land. «Two months later, they had organized a sit-in in front of the headquarters that hosted the meeting of the African Commission on Human and Peoples' Rights, organized by the African Union. They wanted to bring the case before the court,» says a source present at the time of the events in the Gambian capital.
For the record, the presidential elections in Senegal will be held in 2019 and Macky Sall is expected to run for a second presidential term.
Original source: Yabiladi
TWITTER
FACEBOOK
WHATSAPP
PRINT
E-MAIL
TWITTER
FACEBOOK
WHATSAPP
E-MAIL