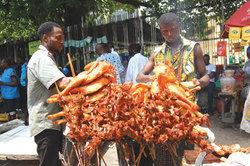 Kalu partners Chinese farmer in chicken production with Okpara varsity
by Igbeaku Orji UMUAHIA
The Michael Okpara University of Agriculture Umudike (MOUAU) Abia State is on the threshold of becoming the largest research centre for the production of poultry products if the partnership brokered by a former Governor of Abia State, Dr Orji Uzor Kalu, between a Chinese billionaire chicken farmer, Hus Yung Jiang and the university is sealed.
While welcoming the Chinese farmer and his team at his country home in Igbere, Bende council area, Kalu said the farmer was worth $7.9billion and supplied chicken, vegetables and fruits to fast food, restaurants and eateries in China, saying that if the partnership is sealed, he would replicate same in eastern part of the country.
The farmer’s visit to the former governor coincided with that of Michael Okpara University of Agriculture Umudike Women Association (MOUAUWA) who came to solicit assistance from the Orji Uzor Kalu Foundation for the building of its skill acquisition centre.
Kalu said that as a university of agriculture with bias on research, which he said was one of the requirements of the Chinese farmer for investing in the country, the university, Abia State and Nigeria would benefit from the investment.

The business mogul said he met the farmer when he “visited China 11 days ago and he promised to come to Nigeria. Now, he is here.” He told the farmer that 11 states in the old Eastern region would be a great business advantage to any investor saying that the only area with the kind of investment is Ibadan, in Oyo State.

Mr Jiang, who spoke through an interpreter, said his initial reluctance to come Africa was because of not familiar with the region. He said that gave way when Kalu convinced him to bring the investment to Nigeria.