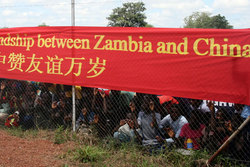 The construction period, which will run for three years, will result in the creation of up to 35,000 jobs when the farming block starts operating.

Dora Siliya, Zambia's Minister of Agriculture said the signing of the agreement marks a milestone in the government's endeavor to construct infrastructure in farming blocks.

"Agriculture is the way to go if we are to develop our economy and we are happy that the Chinese have come forward to help us develop infrastructure in these farming blocks," she said.

Ouyang Daobing, Economic and Commercial Counselor of the Chinese Embassy in Zambia said the two countries have made great achievements in agricultural cooperation over the past years.

According to him, the China-Zambia agricultural technical demonstration center has already trained over 1,000 Zambian agricultural technicians while nine large-scale silos have been built with the assistance of the Chinese government as well as the construction of 920 boreholes.

"Besides, more than 20 farms invested by Chinese nationals or companies are now operating in Zambia, introducing the advanced technologies, rich experiences and bringing modern demonstration effects to the agriculture sector of Zambia," he said.