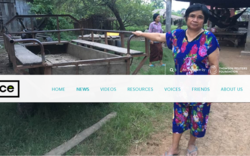 Tep Them in Prame commune in Preah Vihear province, where she is leading a fight against sugar companies for the return of their farm land in Cambodia. Oct 14, 2017. Photo: Thomson Reuters FoundationRina Chandran

Preah Vihear, Cambodia - For generations, Tep Them's family has grown rice, reared cattle and collected resin from the forest to eke out a living and set aside a little extra.

Now, the women spend their days campaigning for the return of their land, while the men look for new ways to earn a living.

Like the rest of the community in Prame in northern Cambodia's Preah Vihear province, Them lost land that her ancestors had cultivated when the government decided in 2011 to develop it under its Economic Land Concession (ELC) policy.

About 40,000 hectares (155 sq miles), home to 25 villages and nearly 25,000 people, were leased to Chinese sugar companies. Few villagers had titles to their land, with boundaries agreed by mutual consent.

The fields, once emerald green with paddy, were quickly planted with sugarcane, and locals' access to the forest and an ancient temple were cut off.

"We have lived off the land for so many years. Yet they took our land, our forest - with no consultation, and little compensation," said Them, 52, her voice shaking.

"The land is our livelihood, our life; how can the government give it away? We want the concession to be cancelled and the land returned to us," she said.

Them and other villagers have tried to halt the onslaught of the sugar companies, sleeping in their fields, blocking the path of bulldozers, confiscating machinery, and planting rice in small patches that they sought to reclaim.

Today, Them, a widow, relies on her children for food, even as she wages a battle - along with half a dozen women in the village - for the return of their land, with petitions at the local and appeals courts, to ministers and even the king.

A spokesman for the government said due process was followed in awarding the ELCs, and that complaints were being examined.

"The government is looking into all the claims; not all of them are genuine. With rightful claims, a resolution is being sought," said Phay Siphan, the spokesman.

The impoverished Southeast Asian country has been riven with conflict over land since the Khmer Rouge destroyed the nation's property records to establish a form of communism in the 1970s.

By 2012, ELCs accounted for more than 2.1 million hectares of land, covering more than a tenth of Cambodia's surface area.

While ELCs were meant for state-owned land with no public purpose, they often included land from small farmers and indigenous groups, leaving locals without home or livelihood.

Such land deals have displaced more than 770,000 people since 2000, human rights lawyers say.

Chinese firms have by far the most land under ELCs, with about 400,000 hectares in sugar, rubber and palm oil plantations, according to rights organisation LICADHO.

Following protests and pressure from rights groups, Cambodian Prime Minister Hun Sen announced a moratorium on new ELCs in 2012 and promised to look into the old ones.

"The government is reviewing all ELCs, and those that are not compliant with the law are being cancelled," Siphan said.

But activists say the reviews did not lead to significant changes, and that even when ELCs are cancelled, the land is often retained by the government and not returned to villagers.

"The government promised that this transformation will bring about development and increased profits. However, it is achieved at great human and environmental cost, with little recognisable benefit to communities," said a report by land rights campaigners earlier this year.

ELCs "have destroyed local livelihoods and what jobs have been created have often gone to people from outside the area," said the report from advocacy groups including Community Network in Action, GRAIN and the Asia Indigenous Peoples Pact.

Across Cambodia, it is the women - through whom land is bequeathed under local law - who lead the fight for land rights and bear the brunt of any crackdowns on protesters.

But disputes have ticked up again recently, with 2016 seeing the largest number of new conflicts in a decade, while the number of resolutions fell, according to rights coalition NGO Forum on Cambodia.

About 88 percent of land conflicts since 2001 remain unresolved in Southeast Asia, according to a separate report.

Earlier this month, officials said about a dozen families will receive some land or compensation.

Them and her neighbours are not among them.

"The government only recognises your land if you have a title; these people do not have a title even though they have lived here for generations," said Ang Cheatlom, executive director at rights group Ponlok Khmer, which is helping Prame residents make their claim.

"The damage to these communities, this land may be beyond repair," he told the Thomson Reuters Foundation.

In Prame, a short distance from the giant sugar factory with blue smoke stacks and Chinese signs, modest wooden homes sit on stilts amidst banana trees and coconut palms.

Half a dozen women gather one evening with notebooks, hand drawn maps and copies of petitions in plastic bags, to discuss their next steps.

"We have lived off the land all our lives; we cannot stand by and watch or work for someone in a factory now," said Them.

"If this country is to prosper, land must stay with the people. We will keep trying to get our land back."