‘For us, the land is sacred’: on the road with the defenders of the world’s forests

‘For us, the land is sacred’: on the road with the defenders of the world’s forests 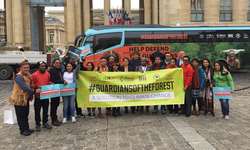 ‘Hope, courage and anger’: The Indigenous Guardians of the Forest caravan to Bonn, in front of the French National Assembly in Paris last week. Photo: Jonathan Watts/the Guardian
Of the many thousands of participants at the Bonn climate conference which begins on 6 November, there will arguably be none who come with as much hope, courage and anger as the busload of indigenous leaders who have been criss-crossing Europe over the past two weeks, on their way to the former German capital.

The 20 activists on the tour represent forest communities that have been marginalised over centuries but are now increasingly recognised as important actors against climate change through their protection of carbon sinks.

In the run-up to the United Nations talks, they have been visiting the UK, France, Belgium, the Netherlands and Germany, talking to city leaders, environment NGOs and youth groups. Their aim is to build support for their role as forest defenders – a role that frequently puts them odds with agribusiness, mining companies and public security. The Observer caught up with them on the road to Paris.

“We have been looking after the forest for thousands of years. We know how to protect them,” said Candida Dereck Jackson, vice president of the National Indigenous Alliance in Honduras, as she outlined the principal demands of the group: respect for land rights, recognition of crimes against the environment, direct negotiations over forest protection, decriminalisation of indigenous activists, and free, prior and informed consent before any development by outsiders.

In one sense it is part of a battle that first peoples – as many indigenous groups refer to themselves – have been fighting since their territories were colonised hundreds of years ago. But this time the campaign is being waged from a bus – previously used for rock music tours and election campaigns – in the context of growing concern about the climate and environment.

This has provided some overlap with their ancient struggle to retain ancestral land and a different set of values.

Cándido Mezúa of the Mesoamerican Alliance of Peoples and Forests said priorities needed to shift away from outside companies who were threatening forests and towards native communities that supported them.

“We see with great sadness that billions of dollars are invested in agribusiness and the institutions that are behind the crisis we are facing, but there is very little interest in indigenous populations who can help with a solution,” he said at a stop at the Royal Society in London.

This is not just a moral argument. Researchers at the World Resources Institute have found that tenure-secure indigenous forestlands provided significant global carbon benefits. In Bolivia, Brazil and Colombia alone they say this is worth $25bn–$34bn over the next 20 years – equivalent to taking between nine million and 12.6 million passenger vehicles off the roads for a year.

Alain Frechette of the Rights and Resources Institute said this was the most cost-effective way to reduce emissions. “Community-owned land sequesters more carbon, has lower levels of deforestation, greater biodiversity and supports more people than public or privately owned forest,” he told the gathering of indigenous leaders, supporters and journalists.

The contrast with more expensive solutions was apparent at the same venue the previous evening when oil company executives and senior politicians called for hundreds of billions of dollars of spending on carbon capture and storage technology, which – though important – is expected to contribute only 14% of the emissions cuts needed for the 2C target.

Instead of such huge sums, participants in the indigenous caravan say they could contribute more to the fight against climate change if their land rights were recognised and states accepted the concept of crimes against the environment. “Money is not important for indigenous people. What we want, frankly, is for you to leave us alone,” said Mina Setra of the Indigenous Peoples’ Alliance of the Archipelago. “We don’t want to be criminalised for protecting our land.”

Setra exemplifies the pragmatic, media-savvy approach of some in the alliances that represent many of the world’s 370 million indigenous peoples – whose territories contains 20% of the world’s tropical forest carbon. Like other participants on the bus tour – from as far afield as Brazil and Borneo – she says communities who traditionally live in forests have a closer spiritual connection to nature, but she gives short shrift to developed world romanticising.

At a service station on the road to Paris, she evokes laughter with an impersonation of Julia Roberts playing the role of Mother Nature in the film Nature Is Speaking, intoning “Nature doesn’t need humans, humans need nature”, then switches back to her own voice to proclaim: “Bullshit!”

Indigenous activists want a place at the climate negotiating table. At Copenhagen and other previous conferences, they were often treated as an exotic and sometimes disruptive diversion who turned up for photos in traditional dress but were given scant opportunity to participate.

This is changing, albeit slowly. The 2015 Paris Accord recognised the contribution of indigenous knowledge in dealing with climate change. This was the most prominent mention until now of their role, though it failed to endorse their land rights. First peoples have, in turn, reversed their position on Redd+, a programme of talks that aims to boost financing of forest carbon sinks.

There is less sign of compromise outside climate talks. Indigenous groups are often locked in land disputes, targeted in assassinations or criminalised by justice systems for resisting forest clearance to make way for cattle ranches, mines and government infrastructure.

As the bus speeds along the motorway, Mark Rivas – a Miskito from Nicaragua – gazes out of the window at the grey skies and peaceful farmlands of northern Europe and reflects on the very different situation in his community. Seven Miskito have been killed so far this year for opposing a land grab by ranchers, he says, but none of the killers have been brought to justice. He too – like many others on the bus – has been threatened. “On this trip, I want to make these problems more visible and get outside pressure on the Nicaraguan government to ensure our land titles are fully recognised,” he says. “This is a climate issue. We don’t want to give up the land so the forest can be cleared by ranchers. For us it’s sacred.”

There is some recognition of this in senior levels of government. In Paris, the indigenous leaders met the French ecology minister Nicolas Hulot – who moved from journalism to activism to politics and played a key role in the Paris Accord of 2015. He said the role of indigenous leaders was important, and not just at the Bonn talks. “They are perhaps the only people who can remind us how man has alienated himself from nature. They can bring a conscience and soul that modern society can aspire to,” he said.

Hulot said he would ask President Emmanuel Macron to invite the indigenous leaders to a summit in France next year, when progress towards the Paris Accord goals will be assessed.

But beyond fine-sounding generalities, participants on the bus said they would be looking for concrete steps – particularly on the question of a planned gold and titanium mine in French Guiana that is opposed by the country’s indigenous groups.

Jocelyn Therese of the Kalina people, said the open cast pit would be blasted out of forested land between two indigenous reserves, polluting the rivers and requiring the construction of a hydroelectric dam. He has appealed to Macron to intervene. “We want support that will enable us to manage the forests as the base for our economy, rather than mining,” Therese said.

Whether the French president listens is another matter. In the capitals of Europe and the US, commercial interests have trumped indigenous and environmental concerns for centuries. This is what funded the construction of the grand capitals of the Old World that the caravan participants have seen this month – some for the first time.

Rivas – the quiet young man from Nicaragua – is underwhelmed. “All the death and destruction that came to our country came from Europe,” he said. “I sense people still have a superficial understanding of our message. What we want is to be able to continue our spiritual connection with the forest.”