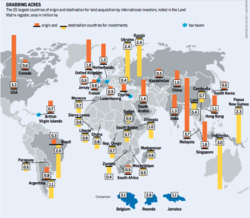 According to the Agrifood Atlas​ - compiled by the Heinrich Böll Foundation, the Rosa Luxemburg Foundation and Friends of the Earth Europe – the monopolisation of the food chain by “ever-fewer, ever-larger”​ corporations has far-reaching consequences for the global food system.

The researchers stressed that the rate of consolidation in the agri-food space is accelerating. Between 2015 and 2016, five of the 12 largest mergers between publicly-traded companies came in the agri-food sector, with a total value of almost US$500bn (€431.3bn).

This activity is being driven by growing private equity interest in food and beverage companies, Benjamin Luig, coordinator of the food sovereignty programme at the Rosa Luxembourg Foundation stressed.

“The report reveals a largely ignored dimension of agri-food sector restructuring. Private equity firms – rather than companies’ shareholders – are increasingly driving concentration in the agri-food sector. Since 2004, one investment group, 3G capital, has led or accompanied mergers which have created the world’s largest beer company (AB InBev), the third-largest fast-food company (Burger King), and the fifth-largest food processor (Kraft-Heinz). Massive job cuts and the closing of bottling stations in the beverage industry are part of the plan.​

“We urgently need regulations that limit the grip of the financial sector over the agri-food sector.”


Competition, choice and the environment at risk

According to the report’s authors, job losses are just one dimension of the threat posed by food sector consolidation. They suggest that large buying cartels enable food retailers and processors to exert price pressure on their suppliers, squeezing out smaller companies and leading to poor working conditions and low pay throughout the food chain.

Consolidation also reduces consumer choice, the report argued, with ten supermarkets accounting for almost half of all food sold in the EU and 50 food processing companies generating half of global food sales.

Oliver de Schutter, co-chair of the International Panel of Experts on Sustainable Food Systems (IPES-Food) noted that consolidation is shaping the food chain and called for a public debate on the topic. “We are seeing an unprecedented surge in mergers and acquisitions in the food and farm sectors that will have major impacts on what we eat and what food we grow in the future. We need an urgent debate and the proactive involvement of regulators to protect the public interest, workers and the environment,”​ he said.

Most significantly, perhaps, the report suggests that merged agrifood corporations are driving industrialisation along the whole food chain. With 20% of the world’s agricultural land now degraded, this represents a “risk to future food production”.​

“Mergers and market concentration in the agricultural sector are skyrocketing - land concentration, monocultures and an almost complete dependency of farmers and consumers on corporate decisions are the alarming consequences,”​ Barbara Unmüßig, president of the Heinrich Böll Foundation argued. “As a result, global biodiversity and the variety and independence in our food chain are at risk. Activists fighting for the right to access to water, land and seeds are met with ever more violent public or private repressions all across the world.”

The report comes as the European Commission faces a decision on whether to authorise the potential Bayer-Monsanto mega-merger. The EC has faced growing pressure to intervene and block the formation of the agri-food giant on competition grounds.

Last month, a study from University College London argued that the deal would raise prices and increase farmer dependency on the combined entity. If the deal were to get the go-ahead the researchers stressed just three companies - ChemChina-Syngenta, DuPont-Dow and Bayer-Monsanto - would own and sell about 64% of the world's pesticides and 60% of the world's patented seeds.

The academics, Professors Ioannis Lianos and Dmitry Katalevsky, also urged the EC to extend its investigation to take account of the social and environmental costs of the proposed merger.

Speaking following the publication of the Agrifood Atlas​, Mute Schimpf, food campaigner at Friends of the Earth Europe said: “The increasing size and power of agri-food corporations threatens the quality of our food, the working conditions of the people producing it, and our ability to feed future generations. The EU can play a leading role in rejecting these consolidations. An alternative food system is possible and is being built by local food producers and citizens across Europe, creating safe jobs and greener farms.”​