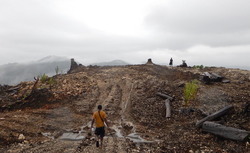 Farmers and communities from across Papua New Guinea have engaged in civil disobedience, protests and lawsuits to reclaim their land, even in the face of violence and aggression.
ActNow! | 31 October 2017
PNG farmers fight back against foreign land grab
By D. Amari Jackson - Atlanta Black Star


Few westerners could even begin to wrap their brains around the traditional lifestyles of the small farmers of Papua New Guinea. Though some do make a nominal income selling small-scale cash crops like coconut and cocoa from their family gardens, these predominantly Black farmers commonly feed their families through subsistence agriculture, hunting, gathering and fishing in one of the most biodiverse regions in the world. Until recently, 97% of the land of this independent southwestern Pacific nation was maintained under customary ownership, a collectivist system in which the land is owned and controlled by the people who live on it.

This traditional lifestyle of small Papua New Guinea farming is being challenged today by modern capitalist greed. Over the past decade, major threats to their land and lifestyle have come in the form of government land deals known as Special Agriculture and Business Leases (SABLs), enabling foreign companies to exploit new areas and rainforests for logging and further deforestation for the development of palm oil plantations. More than 5.5 million hectares of land have been leased through this scheme. And given previous logging concessions, more than one-third of the country — over 15 million hectares — is now under the control of foreign companies.

“Many farmers are desperate because of the destruction of the forest, which means everything for people who are highly dependent on the forests for their food and medicines, soil and watershed protection, and for materials for construction and cultural activities, customs and beliefs,” said Frédéric Mousseau, Policy Director for the Oakland Institute, an independent think tank focused on social, economic, environmental, and  international policy issues. “Many say they have been fooled by the companies and the individuals who arranged the deals with promises of jobs, infrastructures and development.

In 2014, after exporting 3.8 million cubic meters of tropical wood mostly to China,  Papua New Guinea surpassed Malaysia to become the world’s largest exporter of tropical wood. There was little cause for celebration for the nation’s farmers, especially given that three years earlier a government investigation on SABLs found widespread misconduct and fraud in their administration and a pervasive lack of informed consent among those local residents affected. As a result, Prime Minister Peter O’Neill cited a “shocking trend of corruption and mismanagement in all stages in the process” and subsequently announced that all illegal deals would be terminated. However, the government has yet to do so or take any substantial measures to return land to the previous owners or prevent illegal logging.

The government’s inaction is far from surprising given its role in securing the land deals and opening the country up to wide-scale development as an ostensible means of benefitting the country’s citizens through the imposition of taxes and fees. Dozens of foreign companies from Malaysia, China, Australia, the US, and other countries have signed land deals in Papua New Guinea. However, research by the Oakland Institute revealed these deals were not helping the country’s citizens or its economy given persistent financial malpractice and corporate tax evasion.

“The main players involved are Malaysian logging companies that export most of the illegally harvested timber to China,” explained Mousseau, saying “the wood is then likely used as a large share of Chinese wood products exports and makes it way as laundered ‘Made in China’ products to the U.S. The U.S. is China’s biggest market for wood furniture exports, with close to seven billion dollars of imports in 2013, 35 per cent of China’s exports.” Mousseau noted “these imports violate the Lacey Act that is supposed to prevent imports of illegally harvested wood.”

A 2012 report by INTERPOL listed Papua New Guinea as a key country of origin in a worldwide laundering scheme for illegal wood driven by a global demand for high-end furniture, luxury items and wooden musical instruments. Such plunder has been “legal” as well, given the way the Malaysian multinational corporation Rimbunan Hijau (RH), has dominated the New Guinean logging market. Known for its controversial and exploitative tactics, RH spans many industries, including forestry, real estate, media, and biotechnology, among others. The company has a massive presence throughout the urban and rural areas of Papua New Guinea, including high-end city developments and control over as much as 45 percent of all logging.

Given such potent foreign interests, it would be easy for the nation’s small farmers to bow under such odds. But by no means are they sitting idly by as international interests grab their land. Well aware their own constitution explicitly advances their customary land and environmental rights, farmers and communities from about the country have engaged in civil disobedience, protests and lawsuits to reclaim their land, even in the face of violence and aggression.

“Opponents to logging and palm oil are routinely intimidated, beaten, arrested, and subject to legal action by the logging companies,” said Mousseau. “But they are ignored by their own government while the police often side with the logging companies and actually often work to protect their operations.”

Still, some of their measures of resistance have been successful. In August 2016, two National and Supreme Court decisions invalidated SABL leases to foreign companies and returned over 150,000 hectares to landowners in two provinces.

“International mobilization and solidarity with the people is necessary if we want this scandal to stop,” insisted Mousseau. “In the U.S., enforcing the Lacey Act to ensure that we don’t import any wood from PNG is one way forward. International pressure can be brought on the government to preserve the wealth of biodiversity of PNG and protect the livelihoods and basic human rights of the people.”

Despite the powerful forces aligned against them, the small farmers of Papua New Guinea are not without hope. And some believe, ultimately, it is the land itself that will rise to restore a natural order to the crisis at hand.

“Not all are convinced that greed and profit are the only way of life,” offered Governor Gary Juffa of Oro Province, noting that many “are realizing that the forests are them. Lose the forests, lose yourself.”

“They are rising up,” insisted Juffa, contending “the forests will not be lost. The pirates’ days are numbered. The corrupt politicians and public serpents will be identified and dealt with and the forest, as it has always done, will reclaim its territory.”