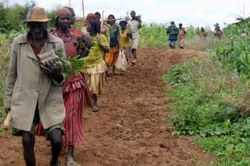 Across the continent, insecure rights to land are robbing millions of financial stability and long-term prosperity. While new technology is giving people the tools to define what’s theirs, governments must recognize that certainty of ownership is a prerequisite of sustainable development.
WASHINGTON, DC – Earlier this month, Liberian President and Nobel Peace Prize laureate Ellen Johnson Sirleaf warned that Africa would continue to be stalked by poverty, hunger, and famine until governments provide smallholder farmers with secure rights to land. She was speaking from experience, both personal and political.
Sirleaf and her tiny West African country are perfect examples of the steep toll that insecure land rights take on individuals, communities, and countries. Disputes over land ownership were a key driver of Liberia’s bloody 14-year civil war. And overlapping claims to land continue to foment conflict and impede foreign investment. Not even the president is immune to weak land-tenure laws; squatters invaded a four-acre parcel that Sirleaf bought in 1979, and refused to move for years.
Stories like these can be heard across the continent. According to the World Bank, more than 90% of Africa’s rural land is undocumented. Overlapping and conflicting land-management systems are the norm, as are inaccessible, out-of-date, incomplete, inaccurate, or nonexistent land records. But while dysfunctional systems of land tenure have no doubt cost African governments millions in foreign investment, they have hurt African farmers most directly.
Africa’s small family farmers – already burdened by soil degradation, climate change, and resource competition fueled by surging populations – face an even more challenging bureaucratic hurdle: no paper to prove that the land they call home is theirs. Uncertain of their ability to control their farms into the next season, farmers’ planning horizons shrink. Instead of investing in terraced fields, planting trees, and buying high-quality fertilizer, Africa’s farmers seek to maximize short-term profits. This is particularly true of female farmers, who face an additional thicket of discriminatory land laws and customs.
Studies show there is no way to reduce poverty, improve nutrition, or achieve other key development goals without strengthening land rights, especially for women. Secure rights to land are simply a prerequisite of development.

In Tanzania, women with secure rights earn three times more than their landless counterparts. In Nepal, children whose mothers have secure land rights are 33% more likely to be well nourished. And in Zambia, in areas where women’s land rights are weak and HIV infection rates are high, women are less likely to make investments to improve harvests – even when their husbands are not HIV positive. These women anticipate that they will be forced off their land if and when they are widowed, and that expectation depresses farm investment, affecting harvests and family nutrition for years.
Given that there are 400 million female farmers, such findings suggest the high global costs – measured in terms of lost productivity and unrealized economic potential – of insecure land rights for women.

In Africa, the signs of insecure land rights are literally etched into the landscape. In some regions, poor recordkeeping and weak administrative structures have forced landowners to post notices in their fields or on their homes, warning prospective buyers that they may be duped into purchasing parcels from people who are not the legitimate owners. In many countries, there is simply no way to know who owns what piece of property.

Communities with clear legal control over land manage those resources more assiduously than those with shaky tenure. The same can be said for individuals. In Ghana, farmers with strong land rights are 39% more likely to plant trees. In Ethiopia, farmers are 60% more likely to invest in preventing soil erosion when they have secure rights to their plots.

But while the evidence is clear, nearly one billion people worldwide continue to lack secure rights to the land they rely on for a living. As the Cadasta Foundation and Habitat for Humanity’s Solid Ground campaign recently demonstrated in a new online survey, these uncertainties have far-reaching consequences. Weak land rights can limit farmers’ access to crop insurance, make it difficult for their children to register for school, and can even contribute to higher rates of suicide.

Currently, Liberia’s Senate is considering legislation that would dramatically strengthen land rights for farmers, including female farmers. Many other countries in Africa (notably Rwanda and Zambia) and in Asia (including Myanmar and India) have done, or are planning to do, the same. These efforts should be supported, expedited, and replicated.

Yet people are not waiting for their leaders to act. Innovative technologies are already providing a path forward for communities in countries with unwilling or incapable governments. Advances in GPS, drones, and cloud computing have given communities the ability to document land – with or without official recognition or support. Together with the Cadasta Foundation, communities from Nigeria to India are using hand-held devices to map property and support land claims with hard evidence, thereby allowing for incremental strengthening of tenure.

Liberia’s drive to spearhead a continent-wide overhaul of land rights is welcome; leaders like Sirleaf clearly understand the challenges that come with weak land laws. But structural changes will take time. In the absence of more assertive government intervention, it will be up to communities and individuals to leapfrog conventional efforts and fill in the blank spaces on the map.
Frank Pichel is Chief Programs Officer and co-founder of the Cadasta Foundation.