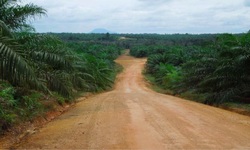 Large tracts of customary land of the Nagari Kapa indigenous community in West Sumatra, Indonesia have been cleared without their consent for palm oil plantations by PT PHP1, a Wilmar International subsidiary. Photo: Forest Peoples Programme

Three-quarters of around 50 conflicts that have erupted in Southeast Asia since 2001 pitting mining, logging or agribusiness giants against indigenous peoples protesting land grabs are still lingering today, researchers reported Tuesday.

Only six such clashes have been resolved, while others have resulted in lawsuits, damaged corporate reputations, abandoned projects, and even loss of life, according to a report keyed to the launch of the first global institution dedicated to securing indigenous land rights.

Whether palm oil plantations in Indonesia, sugar farms in Cambodia, or hydroelectric dams in Myanmar, government-backed business ventures that drive local communities off their land tend to become festering hotspots.

"It's tragic that we still see governments and private sector partners grabbing land, forcing out the inhabitants and levelling their forests," said Victoria Tauli-Corpuz, UN Special Rapporteur on the Rights of Indigenous Peoples.

"Around the world, indigenous peoples are literally dying to project their lands."

Nearly half the disputes analysed in Southeast Asia involved violence, and a fifth resulted in fatalities, according to a report by business risk analysts TMP Systems.

More often than not, these conflicts also take a toll on companies' bottom line.

"We show that there are also hard-headed financial arguments for doing the right thing."

More than 50 percent of the conflicts across eight countries in Southeast Asia resulted in significant financial damage.

Some have also spawned name-and-shame campaigns by activist groups such as Oxfam or ActionAid targeting consumer brands that procure ingredients from companies embroiled in such disputes.

Two sugar-producing giants, British-based Tate & Lyle and Mitr Phol of Thailand, both became the subject of such campaigns.

"This has prompted upstream buyers such as Coca Cola and Pepsi to consider how much they source from these places," Bowie said.

"That pressure is feeding down to producers."

A parallel study of conflicts in Africa, published by TMP Systems earlier this year, found a similar pattern, though the level of violence was even higher.

On both continents, contested plantations were often close to national borders in remote zones where law enforcement is lax or absent, the studies revealed.

"The Facility is really vital," said Bowie, who has been tracking land-tenure conflicts for five years. "It can remove some of the preconditions to conflict."