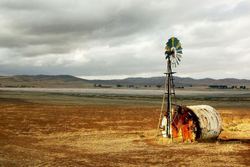 AgCAP, manager of Australia’s Sustainable Agriculture Fund (SAF), has sold more than half of the fund’s portfolio of assets through an initial tranche deal reported to be valued at approximately A$110 million.
TIAA Global Agriculture Properties has acquired 10 of the 17 properties making up the SAF portfolio totaling 16,000 hectares across New South Wales, and Victoria. Its asset manager, Westchester Agricultural Asset Management, has maneuvered to establish numerous deals with local farming businesses in regard to the operation of the properties.
“AgCAP believes these transactions are in the best interest of the shareholders and our staff, and the future management of the assets,” said Deo de Jesus, general manager of strategy, AgCAP  “There will be continuity of operations with local contractors and service providers to be used under the new ownership.”
Included in the sale are::
North Star Aggregation – Purchased by SAF in December 2009, New South Wales-based North Star encompasses five properties totaling 9,710 hectares (23,994 acres) of rainfed cropland growing winter crops including wheat, barley, chickpeas, sorghum, and cotton.
Darlington Point Aggregation – Purchased in October 2010, and also in New South Wales, Darlington Point totals 4,926 hectares (12,172 acres) of irrigated and rainfed cropland growing wheat, barley, maize, cotton, chickpeas, sunflowers, and vegetables.
Western Victoria Aggregation – Purchased in January 2011, Western Victoria is located in the state of Victoria, comprised of three non-contiguous parcels totaling 5,425 hectares (13,405 acres) of rainfed cropland growing wheat, barley, and canola.
After Seven Years
The decision to list the SAF portfolio was announced in March of this year. After seven years as cornerstone investors, a collection of Australian superannuation funds including AustralianSuper, made the decision to exit the Sustainable Agriculture Fund (SAF). The collective move placed AgCAP in the position of listing the fund’s portfolio of agricultural assets on the market with expectations of fetching A$180 million for the properties.
The decision to sell remained in place even after the SAF posted full-year returns of 18.7 percent in August, as a result of strong cash returns and capital appreciation, with net farm profits (not including capital appreciation) coming in at $9.8 million – compared to $8.8 million for the previous year, reports AFR.  These results mark the fourth consecutive year of climbing net cash profits for SAF.
“Growth in profits and farm net profit margins year-on-year is no accident. It is directly related to our pursuit of productivity and efficiency gains in every facet of our portfolio,” de Jesus told AFR.
When listed in March, the course the sale was to take was being viewed with a flexible eye by AgCAP, which remained open to the possibility of a deal either for the entire portfolio, or various deals for certain assets.
“We understand that there will be some parties that will be interested in individual assets, while there will be others that are interested in the fund as a going concern,” said Deo de Jesus in March.
As it turned out, there were parties that placed bids for the entire portfolio, however, these were not able to compete with the combined bids for specific assets.
“These bids were significantly exceeded by the combinations of bids for individual assets,” Danny Thomas, one of the CBRE Agribusiness agents managing the sale, told Grain Central.
AgCAP together with CBRE are expected to make an announcement in the near future regarding the potential sale of the balance of the SAF portfolio which includes:
King Island Aggregation – Purchased in February 2010, King Island is a beef cattle operation located in Tasmania encompassing 6,786 hectares (16,768 acres) which runs a self-replacing Angus herd at the location.
Cradle Coast Aggregation – Purchased by SAF in December 2010, Northern Tasmania-based Cradle Coast is a pasture-based dairy operation encompassing 1,145 hectares (2,829 acres). The operation is managed by on-site sharemilkers.
-Lynda Kiernan
Original source: GAI
TWITTER
FACEBOOK
WHATSAPP
PRINT
E-MAIL
TWITTER
FACEBOOK
WHATSAPP
E-MAIL