Sustainable investments are not always what they seem 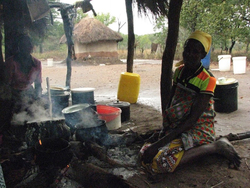 Sustainable investments are not always what they seem
Investors need to better educate themselves about the local context in which their funds are deployed.


By Heather Grady
Have you ever booked a flight and dwelled on whether to tick the box to support a carbon offset project? Or been reassured by a news article about the wonders of projects like forest plantations in Africa, which seem like win-win-wins for people, profit, and the planet? Me too.


Or at least I did until I went to Mozambique last month. I took some time off work to visit the incredible Gorongosa National Park, and volunteer for the Business and Human Rights Resource Centre, on whose board I serve. Together with a colleague from Brazil, I set out to learn more about the framework for business and human rights in the region, and explore a complaint filed by local communities against a company that is using thousands of hectares of community-owned land to monocrop trees—grow a single crop year after year on the same land—for biofuel and export markets.
In Mozambique, like many other African countries, the national government wants to increase foreign direct investment. Foreign companies love cheap or free land. Benefits to investors and consumers include higher land productivity and carbon sequestration. Government may see benefits in developing the economy, and local government officials sometimes get rewards (although the more local they are, the less they may get—perhaps a new building or, as we heard in one case, a bicycle) or a promise (revenue once the company begins earning profits or better health and education services). Sometimes there’s a simple pay-off of individuals to overlook regulations or follow the lead of a higher level of authority.

Meanwhile, poor communities are losing land they depend on. Many use their individual plots and community-shared land for purposes such as farming, grazing animals, hunting, and collecting water and firewood. They also use land for cultural purposes such as worship and burial. Their loss of land and subsequent increased impoverishment is exacerbated in a globalized economy with great inequalities in wealth and power. Developing countries in particular often have informal or incomplete land titling, and lack clear maps of existing individual and community land use, empowered community representation and local government, written contracts in local languages, and clear arbitration procedures.


During my trip, I realized the patterns of investment in forestry—which many of us believe is a positive alternative to mining, gas, and oil exploration—are harming these communities. And the problem is growing. Julian Evans of the University of London notes that by 2050 the total area of plantations will exceed 200 million hectares and become the main source of wood products globally.

On the Ground in Mozambique
Hosted by local and international NGOs, our visit began with a private meeting with a plantation company and one of its investors. After creating a business plan for investment in Mozambique, it paid the government an undisclosed sum for an allocation of land and conducted what it viewed as a sufficient number of community meetings. Afterward, about 250 families moved from their land so that the company could plant about 8,000 hectares (nearly 20,000 acres) of one type of tree. Community members who refused to leave received five hectares (about 12 acres) of land, surrounded by the monocrop plantation. The company claims it met obligations to the community for jobs and social services, and expressed surprise and anger that the community contacted outsiders about their situation.

Community members and local organizations said that the actual number of full-time jobs and occasional-labor contracts was much lower than the community anticipated, and that four years earlier, the company filled an important local lagoon and did not create a new one as promised. They also said the company ignored promises to maintain local gravesites and places of worship, and provide transportation for health emergencies. An accident with a company truck had killed and injured a group of locals, and two of the women who were hurt were still waiting for proper treatment. One man noted, “Nothing was clear in writing and we didn’t know it should be; we did not know how to request the right process. But the company and the local government knew there should be local consultations and signing of documents.” Another said, “Before the company came we lived alright. But they didn’t respect our culture.” The local nonprofits and church leaders the community contacted for support backed these assertions.

Two main issues, we found, underpinned this situation: unfair dealmaking and unclear definitions:
1. Unfair dealmaking. Often policies stipulating community consultations where land may be allocated to outsiders are flouted or seriously flawed. One complicating factor is language: In Mozambique, for example, the official language of this former colony is Portuguese, but local community members in rural areas usually don’t speak Portuguese. Perspectives are lost in translation. Second, while community consultation processes are written into law, communities usually don’t adequately understand them. So both companies and local officials skirt around them. The result: not enough meetings, insufficient translation, and unequal power dynamics. Third, in cases of shared or traditional non-titled land ownership, it is often unclear which community members will be affected. In the end, there may or may not be paperwork secured with thumbprints and a few signatures.

2. Unclear definitions. People inside and outside Africa often imagine that the continent contains vast areas of land untouched by humans—an assumption based on the sheer size of Africa and its relatively low population density. But while Mozambique and other countries have many sparsely populated areas, people still live there—and virtually all of them earn their living and feed themselves by way of their household agriculture on this “marginal” land.
The Mozambican company representative and investor we spoke to seemed to think that local farmers weren’t growing anything on most of this land. The company told us it promised the community jobs on the plantation but didn’t offer compensation to community members who relocated, because they had a choice to keep a plot of land within (and completely surrounded by) the plantation. But even for those who stayed, the venture disrupted the movement of people and animals, and of course livelihoods.
People vs. Green Investing
What worries me most in all of this is that the company and investor considered the plantation a “social” project—one that provided community members with a better life through increased income from employment. But they haven’t calculated the income and food lost from farming and other traditional land use. The company sees social benefits and potential positive impact on climate change; the community sees the loss of the local water supply and sacred sites.
Many multinational agricultural companies—including the Norwegian company Green Resources, and Brazilian companies Mozaco and Alfa Agricultura, which are investing in the contentious ProSavana project—position their ventures as environmentally and socially responsible. But we saw the potential shortcomings firsthand during our visit.
What’s more, we learned that NGOs engaged in the processes are often required to sign confidentiality clauses, which leaves a lot of information undisclosed and a lot of communities left out. Communities, meanwhile, assume these ventures have a pure profit motive. Based on our research and experiences, we have to conclude this is often the case.
Solutions
Impact investors have an obligation to look into the people side of their green investments, and can take steps to ensure that local communities’ rights are respected by:
Doing due diligence. The Business and Human Rights Resource Centre links to dozens of sites that focus by country and industry sector. Also, when investors find something that needs improving, they need to commit time and money to resolving the challenges.
Supporting NGOs working on these issues. Organizations like the Aliança da Sociedade Civil Contra a Usurpação de Terra em Moçambique, Women’s Association to Promote Community Development, Lutheran World Federation, and Action Aid are in this for the long haul, and need moral and financial support.

This is a pivotal time for countries like Mozambique. High growth rates can still leave them amongst the poorest countries in the world, with low human development indicators. This doesn’t mean we stop funding, but a crisis in confidence in business and government can and must spur more citizens and investors to define new approaches to accountability and new pathways for development.

When Eleanor Roosevelt was leading work on the Universal Declaration of Human Rights, she said, “Where, after all do universal human rights begin? In small places, close to home, so close and so small that they cannot be seen on any map of the world. Yet they are the world of the individual person: the neighborhood he lives in; the school or college he attends; the factory, farm, or office where he works. Such are the places where every man, woman, and child seeks equal justice, equal opportunity, equal dignity without discrimination.”  We must remember these words before we tick the box.
Heather Grady is a vice president at Rockefeller Philanthropy Advisors and a board member of the Business and Human Rights Resource Centre. She is also a member of the Global Future Councils of the World Economic Forum and the NationSwell Council. The views expressed here are her own and do not represent those of any organization.