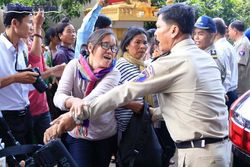 On 30 August 2017, 40 people brought a petition to the Chinese Embassy in Phnom Penh calling for the withdrawal of a group of Chinese agribusiness companies from Preah Vihear province in northern Cambodia. The companies, five subsidiaries of the Chinese company Hengfu, are accused of grabbing land in 2011 from tens of thousands of families and their communities, destroying local ecosystems and putting farmers’ livelihoods in jeopardy.

Representing affected communities in Tbeng Meanchey, Chhep and Chey Sen districts, the petitioners travelled to the Cambodian capital by their own means. They were joined in solidarity by eight people whose communities have similarly been affected by Cambodia’s Economic Land Concessions (ELCs), large tracts of land that have been allocated by the government to domestic and foreign investors since 1995.

The petition, which carried the thumbprints of 3,128 people directly impacted by the sugar plantation land grab in Preah Vihear, called on the Chinese government to review Hengfu’s compliance with the Chinese government’s environmental and human rights guidelines and international human rights standards, and to remove the companies from their lands. It also carried thumbprints of 176 supporters from other communities in the province.

Five petitioners were allowed into the Chinese Embassy. They were received by the Embassy’s personnel and had more than one hour discussion. Outside, people stood in an orderly fashion, holding banners along the side of one of the city’s main boulevards and seen by large numbers of passers-by. There was no effort to disrupt them.

The petitioners were suggested to submit their petition to the Chinese Embassy’s Economic and Commercial Counselor’s Office and were escorted there by police. The Economic and Commercial Counselor’s officer received the petition while the community representatives kept putting up banners for about an hour. They were also interviewed by reporters from various media outlet such as the Cambodia Daily, Phnom Penh Post, Radio Free Asia, and others.

The Embassy’s Economic and Commercial Counselor’s Office is located across the street from Cambodia’s Ministry of Land Management, Urban Planning, and Construction. It is perhaps a coincidence that, later that day, the Minister issued a statement announcing the establishment of committees in Preah Vihear, Koh Kong, and Kompong Speu to resolve the conflicts involving sugarcane concessions.

Farmers are already expressing concerns that the Ministry only intends to address individual claims to land, not the destruction of land used collectively for collection of forest products or grazing cattle. Similar past attempts to resolve conflicts with economic land concessions also shows only a portion of individual claims are being resolved.

We are people from indigenous communities and non-indigenous communities who have been impacted for many years by companies from China, namely Lan Feng, Rui Feng, Heng Nong, Heng Rui, and Heng You companies which have taken our rice paddies and upland fields, violated our rights to use natural resources and destroyed them, and are causing serious corruption.

Subject: Request that the government of the People’s Republic of China review and cancel the five subsidiaries of Hengfu, namely Lan Feng, Rui Feng, Heng Nong, Heng Rui, and Heng You, that are planting sugarcane in Preah Vihear province, Cambodia as quickly as possible.

Beginning in 2012, our communities have lost land as the five companies did not respect the principles of human rights and development.

The companies have plowed, and continue to plow, rice paddies, upland fields, forest lands used for collection of forest products, spirit forest lands, and reserved forest lands and have planted sugarcane, build roads back and forth, and built worksite buildings that are obstacles to our farming. They have threatened, intimidated, seized, accused, and intended to drive tractors over community members, caused injuries to women, used degrading language and malicious gestures towards the people who own the farmland. Small children have dropped out of school to follow their parents and no longer dare to tend cattle and buffaloes out of fear.

3. Causing corruption with local authorities and the court system

Hengfu has provided money to support sub-national authorities and armed officers to assist them in grabbing our communities’ land.

We, Khmer people, both indigenous people and local communities, are angry every day, have no freedom in speaking out, live under oppression, and lack peace in our hearts. There are racial discrimination, violence, and direct public statements against us, aimed at destroying the Kuy people.

In March 2013, indigenous communities had a meeting with a representative of Hengfu to find a resolution to the conflict, and the community representative signed an agreement that the company would stop plowing rice fields – but the company later broke its promise. Kuy indigenous communities submitted a request to register their communal land to the provincial governor, but Hengfu grabbed the land and planted sugarcane on it. In May 2014, our communities filed a complaint to the Preah Vihear provincial court against Lan Feng and Rui Feng companies, which are subsidiaries of Hengfu, charging them with crimes against humanity according to article 188 of the Cambodian criminal code. In December 2014, we confiscated two of Hengfu’s bulldozers that were clearing our rice fields, and in January 2015 our communities filed complaints with the Preah Vihear provincial court against the two bulldozer drivers of Hengfu, charging them with willful destruction of property, based on article 410 and 411 of the criminal code and article 248 of the 2001 Land Law of the Kingdom of Cambodia. In January 2016 our communities stopped tractors plowing our rice fields in order to negotiate a solution, but Chinese workers holding clubs threatened to beat us. Not only that, the Chinese tractor driver planned to drive over and kill our community representatives. These actions are extremely brutal. Unfortunately, our communities have not received any resolution or positive result.

As per the subject and explanation above, we ask that you, Mr. President, please accept our complaint petition and review, take measures and cancel the Hengfu subsidiaries in Preah Vihear province as quickly as possible.