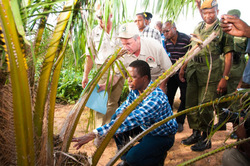 Zambeef shares tumble, as weak crop prices, wheat disease hit profits
Shares in Zambeef tumbled after the soybeans-to-eggs group marred the unveiling of an unexpectedly strong sale price for a palm oil asset with a warning that weak corn prices and fungal wheat disease had left it facing a loss.
The group revealed it had sold 90% of its Zampalm operation to the Industrial Development Corporation of Zambia, a state-backed fund, for $16m, with the potential for a further payment of $2m if the business meets performance targets up to 2020.
The sale brought Zambeef's exit from a palm oil industry the company felt it was "no longer essential to be involved in", following the entry of a "number of" new participants to the sector, making it "highly competitive".
The price achieved for Zampalm, which has some 2,900 hectares of its 20,200 hectares planted in oil palms, was lower than the $19m at which the operation is valued in Zambeef's accounts.
But it was bigger than the price that many investors thought the group would achieve, with Ed Hugo, at London broker VSA Capital, saying that "no-one thought Zambeef would get anywhere near that much" for what he termed a "stranded asset", outside the territory of the major palm oil groups.
Oil palm trees grow successfully in a relatively narrow band of tropical climates, with the likes of Liberia and Sierra Leone, closer to the equator, among more popular African countries for development.
Corn, wheat setbacks
However, the sale, which Zambeef termed "positive news", raising cash for paying down debt, was overshadowed by the group's second profits warning in three months, this time over "a number of serious challenges" at its cropping division.
One was a drop in crop prices, including a plunge of some 30%, to $160 a tonne, in corn values over the last four months.
Prices have been undermined by strong prospects for southern African production, including in Zambia, as Agrimoney.com reported last week, besides the weaker global market.
Furthermore, the group said the yield on its winter wheat crop, currently being harvested, looks like coming in 20% short of company expectations, thanks to losses to septoria, a fungal infection.
"This disease has always been present in Zambia and is part of the target of our fungicide spray programme," Zambeef said.
"The strain this year appears to be more virulent."
'Out of the blue'
"It is disappointing to report that largely external factors affecting the cropping division are likely to have a material adverse impact on group reported results," said Dr Jacob Mwanza, the Zambeef chairman.
The group said that it expected, at best, to report a pre-tax profit of $500,000 for the year to the end of this month, and potentially a loss of $2.5m, which would be the third result in the red in four years.
"That would be a disappointing result," Mr Hugo said, although one down, in wheat at least, to a setback likely to prove a one-off.
Zambeef shares closed down 8.0% at 10.70p, having earlier touched 10.183p, a drop of 12.2% on the day, and a 13-month low.
"It may be that, longer term, people take more notice of the Zampalm sale," which "came out of the blue, and represented a decent amount of money for something many people had written off".


Announcement of Disposal of 90% of Zampalm Ltd to IDC Zambia Ltd (AIM)
September 6th, 2017
Zambeef (AIM: ZAM), the fully integrated cold chain food processing and retailing group with operations in Zambia, Nigeria and Ghana, announces that it has entered into a Share Sale Agreement, a Shareholders’ Agreement and a Management Agreement (together, the “Agreements”) with the Industrial Development Corporation of Zambia Limited (“IDC”) for the sale of 90 per cent. of Zambeef’s shareholding in its wholly owned subsidiary, Zampalm Limited (“Zampalm”) to IDC for a cash consideration of USD16 million (the “Consideration”) (the “Transaction”). For more information on IDC, please see the notes section.
Transaction Overview
Disposal of 90 per cent. of Zambeef’s shareholding in Zampalm (after loan capitalisation, as referred to below) to IDC for a total cash Consideration of USD16 million.
USD16 million cash to be paid on completion, with a further Performance Amount of up to USD2 million dependent on performance milestones over the three years from 2018 to 2020.

Disposal is aligned with the Group’s strategy of focusing on its core business of the production and retailing of cold chain meat and dairy products, cropping and stockfeed.

Proceeds will be used to further pay down the Group’s debt and thus reduce gearing and interest costs.