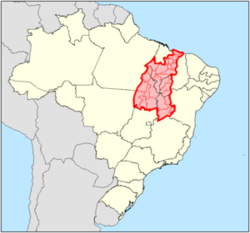 MATOPIBA, a term that refers to the northeastern region of Brazil comprising the state of Tocantins and neighboring areas in the states of Maranhão, Piauí and Bahia, is a paradigmatic example of land expropriation.
FIAN et al. | 04 September 2017
International mission to measure human rights impact of land grabbing kicks off
An international delegation will travel across the Brazilian region of MATOPIBA to document the social, economic, environmental and human rights impact of large-scale land acquisitions.
This week, a group of 30 human rights, development and rural experts will start a 10-day fact-finding mission (FFM) in northeastern Brazil. Spurred on by existing evidence of human rights violations and environmental destruction, the mission will further document and analyze the structural impacts of large-scale acquisition and shed light on the scheming of land-based business in the region.
Land grabbing, a phenomenon that is becoming the norm
Since the 2008 multidimensional crisis, the phenomenon of land grabbing has multiplied rapidly and profoundly the world over. With it, a big movement of capitals by States and companies in the rural areas has increasingly been noticed behind the scenes of violent expropriation of traditional populations of their land, causing devastating environmental and social impacts. And Brazil, covered in populous forests and savannah, has been a key target for investors of the land business, who have seen their profits skyrocket up to 400% thanks to the expansion of commodity-producing agro-industries such as soy, sugar, corn, cotton, eucalyptus and meat.
MATOPIBA, a term that refers to the northeastern region of Brazil comprising the state of Tocantins and neighboring areas in the states of Maranhão, Piauí and Bahia, is a paradigmatic example of land expropriation. As deforestation and the consequent development of farms cost very little to investors in border areas and brings exorbitant returns, the region has been in the crosshairs. Cases of land expropriation in the region have often involved large-scale public land acquisition from locally renowned land grabbers by international pension funds through Brazilian real estate companies. The latter, in reality, are transnational enterprises specifically created with this purpose.
The human cost of land acquisition
Such border areas are the habitat of peasants, indigenous peoples, descendants of runaway slaves and other forms of so-called traditional populations. Yet, massive and violent evictions, starting in the first decade of the 21st century, relegated traditional communities to neighboring areas with scarce natural resources, which have proven insufficient for their survival and maintenance.
Those who left permanently and migrated to the cities, are currently living in slums in the peripheries of these great metropolises, trying to survive as part of the precarious workforce or illegally. Others that managed to remain, if they have not been violently evicted again yet, can only do so if they work in very risky conditions, almost mirroring slavery, in the same agribusiness farms that occupied their former lands.
Meanwhile, deforestation and the over-exploitation of land and other natural resources are leading to the destruction of biodiversity in the region.
The mission
During the FFM, participants will visit emblematic communities to document and analyze the structural impacts of land grabbing from a human rights perspective. The mission will also look into the obligations of the State of Brazil, as well as identify concrete extraterritorial human rights obligations of other States, where companies are part of the larger land business web.
The mission, organized by FIAN International, will count on the participation of: Action Aid International and Brazil, Aidenvironment; Cáritas Regional do Piauí; Comissão Pastoral da Terra Nacional and Piaui; Escola de Formação Paulo de Tarso (EFPT - PI); Federação dos Agricultores Familiares (FAF); Federação dos Trabalhadores Rurais na Agricultura (FETAG-PI); HEKS/EPER International Institute of Social Studies; La Via Campesina International and CLOC- La Via Campesina, Maryknoll, Paróquia de Santa Filomena, Instituto Comradio do Brasil; Rede Social de Justiça e Direitos Humanos; Sindicato dos Trabalhadores Rurais de Santa Filomena; Vara e Procuradoria Agrária - PI, PROGEIA (Santa Filomena), as well as FIAN International’s sections in Germany, Netherlands and Sweden.
A press conference will be convened in Brasilia on September 14, following a public hearing with Brazilian authorities. For media enquiries, please contact [email protected] and/or [email protected]
Follow updates on social media via #BrazilLandGrab and #CaravanaMatopiba
Original source: FIAN et al.
TWITTER
FACEBOOK
WHATSAPP
PRINT
E-MAIL
TWITTER
FACEBOOK
WHATSAPP
E-MAIL