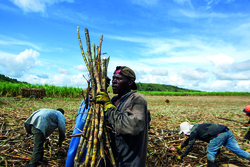 Dangote Group, has decided to turn its attention to agribusiness by investing heavily in sugar and rice production.

The firm is already active in food processing but has now decided to make the sector a key part of its overall business strategy. The sheer scale of its investment, coupled with renewed government interest in food production and difficulties over financing food imports, suggest that the tide may be turning in favour of Nigerian agriculture.

The Dangote Group is to invest $3.8bn in rice and sugar over the next three years. It aims to increase its sugar production of 100,000 tons a year at present to 1.5m tons a year by 2020, a rapid rise by any standards.

It also plans to grow and market 1m tons a year of rice by the same date. Edwin Devakumar, Dangote Group executive director, said: “All raw sugar has to be imported today, same thing for flour milling.” The company is also considering investing in soya beans, palm oil and corn.

Dangote has spun its cement operations into a separate firm that is now the biggest listed company in Africa outside South Africa and Morocco. It plans to do the same thing with its rice subsidiary, Dangote Rice, although the timing of the listing has not yet been determined.

Dangote Rice is to secure contracts with farmers on 200,000 hectares of land for rice cultivation and is to build 10 rice mills in the north of the country. The farmers with which it works will be supplied with fertilisers, seeds and pesticides.

The group also plans to achieve sugar cane cultivation on 350,000 hectares, with five mills. A lot of the land will be directly owned. One of the five mills will be developed on the long delayed Lau Sugar Company project in Taraba state.

The scheme will have production capacity of 430,000 tonnes a year, making it by far the biggest sugar project in the country. Dangote’s interest in greatly increasing domestic cultivation of basic foodstuffs is good news on two counts.

Firstly, the company has a track record of success. It has managed to rapidly increase Nigerian cement production and has now opened cement plants in the rest of Africa.

And secondly, the fact that Dangote sees Nigerian agriculture and food processing as ideal investment opportunities suggests that the sector has great potential. Nigeria was a significant food exporter until the 1960s but has gradually become more reliant on food imports, including of staple crops that could easily be grown locally.

The country’s agricultural heritage was largely overlooked once the oil boom took off. Successive governments have pledged to reinvigorate domestic production with little success, so only time will tell whether the administration of President Muhammadu Buhari can fulfil its pledges on food production.

However, the country’s current economic woes are providing an ideal opportunity for investing in Nigerian agribusiness. The lack of access to foreign currency, including the Central Bank of Nigeria’s restrictions on providing foreign currency to pay for imports, is making it more difficult to finance food imports.

Import substitution is usually discussed in the context of manufactured goods but it is a talking point in Nigeria even with regard to staple foodstuffs. The government has retained the previous administration’s Sugar Master Plan (SMP) to make the country self-sufficient in sugar production.

The minister of agriculture and rural development, Audu Ogbeh, claimed in July that the country would be self-sufficient in rice production by November. In a passionate speech, he called on Nigerians to opt for Nigerian products rather than always thinking that imports are better.

He said: “We are a country that has a penchant for importation without exporting anything… We import champagne, cookies, toilet paper and even toothpicks. We have this taste for foreign products. This is killing us; it is killing our economy.”

This seems very ambitious, given that Nigeria imported 2.3m tonnes of the 5.2m tonnes of rice it consumed in 2016, making it the second biggest grain importer in the world, after China. There have been problems over land acquisition for new projects and so the government’s June review of its rice strategy concluded that there had been insufficient private sector investment in the rice sector.

In addition, industry bodies have called for a programme of support from the Nigeria Agricultural Insurance Corporation to help balance out revenue from the extreme fluctuations in rainfall patterns that have affected production. While some crops are usually grown on large plantations, rice – like cocoa – is often produced by small-scale farmers, so boosting domestic production has the potential to support thousands of small-scale rural businesses.

However, such small producers often lack the financial resilience to cope with extreme weather. The kind of agricultural insurance provided on mobile telecoms platforms in East Africa has yet to take off in West Africa.

The government and a wide range of external organisations are trying to boost yields through training programmes to demonstrate the most efficient techniques. For example, the Partnership for Sustainable Rice Systems Development in sub-Saharan Africa and the Africa Rice Centre are working with 300 farmers in six states to develop demonstration plots. In particular, they are keen to show other farmers the best options for rain-fed rice cultivation.