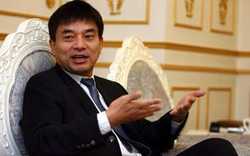 Liu Yonghao, chairman of China’s agrichemical business New Hope, started his company in 1982 by investing in breeding quails and chickens to sell on to other farmers.
China's richest chicken farmer has joined a brood of bidders vying for a £1bn takeover of Northern Irish poultry giant Moy Park.

Liu Yonghao, chairman of China’s agrichemical business New Hope, started his company in 1982 by investing in breeding quails and chickens to sell on to other farmers.

He made a fortune as the Chinese appetite for meat soared and the business has grown to become one of the largest non-government conglomerates in China, with nearly 70,000 employees across 30 countries.

Industry sources said that New Hope was now the frontrunner to clinch Moy Park after the firm was put up for sale in June by its Brazilian owners in the wake of a political corruption scandal.

JBS bought the business just two years ago for £1.2bn but is now rapidly trying to offload assets to cut its debt pile. Its weak financial position has been exacerbated after its controlling shareholder, J&F Investimentos, entered into a 10.3bn real (£2.5bn) plea bargain for its role in a political corruption scandal in Brazil.

Moy Park is the largest private employer in Northern Ireland with 6,300 workers based in County Armagh.

Chinese group WH, which controls the world’s largest pork producer Smithfield Foods, has also previously been tipped as a suitor for the business. Other companies believed to be interested include US-based Tyson Foods, Brazilian food company BRF and private equity firm CapVest.

Bankers close to the process said that a deal was unlikely to be derailed by the Chinese government’s crackdown on overseas acquisitions as New Hope could prove there was industrial logic behind a takeover and argue that the deal would boost China’s efforts towards self-sufficiency in agriculture.

Overseas deals by Chinese companies hit a record $170bn (£132bn) in 2016, prompting the Chinese government to scrutinise some companies.