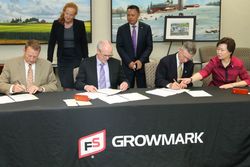 Representatives from Growmark and Cofco have signed on for a new grain supply agreement. Photo: Growmark
China's state-owned COFCO International Ltd (CIL) and U.S. farm cooperative Growmark Inc will partner in a deal that gives China more direct access to the food it imports, the companies said on Friday.

The grain supply partnership is the latest expansion move by CIL since it invested $3 billion to buy Noble Group's agribusiness and a large stake in Dutch grain trader Nidera in deals that bolstered its position in the international grain market.

As part of the deal, the companies said they would jointly own and operate a truck, rail and barge terminal in Cahokia, Illinois, on the Mississippi River, the main pipeline that supplies exporters along the U.S. Gulf Coast with corn and soybeans. COFCO acquired the terminal near the busy inland port of St. Louis as part of its Nidera deal.

The facility can receive about 180,000 bushels of grain per hour, delivered by truck and rail, and can load two river barges simultaneously at a rate of about 60,000 bushels per hour, Brent Ericson, Growmark's senior vice president for member services told Reuters.

Growmark staff will assist in sourcing grain at COFCO's St. Louis office as part of the partnership, the companies said in a statement.

The deal draws a more direct link between a large Chinese food importer and farmers in the world's largest corn exporter and No. 2 soybean exporter.

Growmark hopes to solidify ties to a huge market in China, the world's top soybean importer and major buyer of other agricultural goods.

"It gives us more of a direct pipeline to those end-users. Economics dictate where grain moves, but all things being equal this gives us a leg up in the Chinese market," Ericson said.

The companies did not disclose the terms of the deal.

COFCO said last year that it was seeking potential partnerships or acquisitions in North America, but Reuters has since reported that the company has struggled to integrate its large acquisitions and may not participate in a large-scale industry consolidation.

Large grain traders have been struggling with a grain glut that has depressed crop prices and squeezed margins for the companies that aim to make money buying, selling, storing and shipping grain around the world.