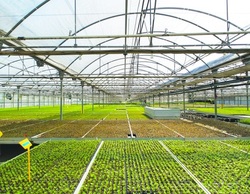 Egypt and the Korea-Arab Society (KAS) signed Tuesday a cooperation protocol to build a $10 billion integrated agricultural city in the North African country.

The city will be stretched over an area of 300,000 feddans (126,000 ha) in the southeast part of the Qattara Depression, north west of Egypt, said Prime Minister Sherif Ismail speaking at a press conference following the signing ceremony.

The protocol was signed by the General Authority for Reconstruction Projects and Agricultural Development, an affiliate to the Egyptian Agriculture Ministry, and the Korea-Arab Society, represented by the Korean Arab Company for Economic and Cultural Consultancy.

Within a six-month timeframe, the city is set to be completely built by Egyptian workers, under the supervision of Korean experts, Ismail said.
The city will include agricultural projects by using the latest technologies, the establishment of 50,000 smart greenhouses as well as a number of seawater desalination and solar power plants, besides projects to produce fodder and cultivate stevia, the healthy alternative sweetener and sugar substitute.

The protocol is one of the significant outcome of President Abdel Fattah al-Sisi’s visit to South Korea in March 2016, said Agriculture Minister Abdel Moneim El-Banna.