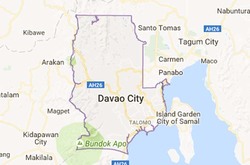 A group of Japanese businessmen visited this city last Wednesday to explore possible investment opportunities in the agriculture sector.


Davao City Investment Promotions Center (DCIPC) chief Lemuel Ortonio said that he met with a group of prospective Japanese investors in his office to discuss available areas for investment the city’s thriving agriculture sector can offer.

He said there was a Japanese investor who signified a specific interest for discarded pineapple crowns from the city that they said can be processed as one of the key ingredients for “pet food.”

He said these businessmen asked him to arrange a tour around the vast plantations in the suburbs of the city upon their return next month.

According to Philippine Statistics Authority (PSA), Davao City recorded the highest production of pineapples in 2016 at 25,794 metric tons (MT), or 98 percent of the overall production of Davao Region at 26,300 MT.

The visit of Japanese Prime Minister Shinzo Abe and his wife, Akie, in the Davao City, the hometown of its former mayor and now President Duterte, last January 13 was seen to strengthen the diplomatic and economic relationship of the Philippines and Japan.