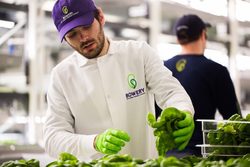 A farmer at Bowery, a vertical farming startup in New Jersey. Photo: Bowery
In the largest agriculture-tech funding round in history, vertical farming startup Plenty attracted $200 million. Plenty will use the investment to build more farms around the world. Some experts say the investment could make the indoor farming industry more viable as a whole

Plenty is no ordinary farm.

Instead of growing greens outdoors, the farm grows its food on glowing, LED-lit 20-foot-tall towers inside a former electronics distribution center in South San Francisco. The towers don’t require pesticides or even natural sunlight.

The technique is called indoor vertical farming, a type of agriculture in which food grows on trays or hanging modules in a climate-controlled, indoor facility. The process could one day upend the world of agriculture, because it means certain types of food could be produced yearround, anywhere, in a small space. Produce could be delivered to consumers within hours of harvest.

Plenty, founded in 2014, claims to grow up to 350 times more greens than conventional farms of similar size, while using much less water and land. The goal, Plenty CEO Matt Barnard told Business Insider, is to revolutionize the way the world grows food – and sell that food for lower prices than typical produce.

A $200 million investment in the startup could help make that vision viable.

Announced July 19, the Series B funding round was led by SoftBank Vision Fund and included DCM Ventures as well as funds that invest on behalf of Alphabet’s Eric Schmidt and Amazon’s Jeff Bezos. With the new investment, Barnard said Plenty plans to build more farms around the world.

“By building out our global farm network, we’ll be able to deliver amazing produce to communities within hours of harvest,” Barnard said.

Some experts say the funding could help the indoor farming industry as a whole. Dickson Despommier, a professor of microbiology and public health at Columbia University, told BI the investment will make indoor agriculture even more commonplace, and encourage other VCs to fund vertical farm companies.

“I think that most cities now accept urban agriculture as normal, so the hurdles are mostly with marketing and the consumers who are unfamiliar with the kinds of produce that vertical farms can make available 24-7: leafy greens, root vegetables, berry fruits, and the like,” he said.

“Locally grown indoor greens now taste really good. Because you can get to know your farmer, consumers can start to trust their food again. It’s an exciting time for real food,” he told BI.

Vertical farming has attracted increasing interest from venture capitalists in recent years. Founded in 2004, vertical farming company AeroFarms is growing dozens of varieties of greens in nine warehouses (the largest at 69,000 square feet) in New Jersey, and has raised $95.8 million to date. Another startup, called Bowery, has raised $20 million since its early 2017 launch.

Plenty has raised the most money by far.

Not every venture has proven successful, though. Alphabet tried to create an automated vertical farming system in its secretive “moonshot lab,” but axed the project in 2016 after the team couldn’t grow enough staple crops, like grains and rice, using the technique. VertiCrop, a vertical farm company founded in Vancouver in 201, declared bankruptcy after only three years.

Like Plenty, most vertical farming startups focus on growing greens, which can generate a higher yield at a lower operational cost than other types of produce. But even industrial-sized vertical farms, like those operated by AeroFarms and Bowery, sell their greens for about the same price as organic produce (sometimes even more).

Plenty is hoping to eventually offer its greens at a cost lower than greens grown on traditional, non-organic farms, Barnard said. One of the biggest struggles for the company is the energy usage cost from the LEDs, though the lighting technology has become more of a commodity in the past several years.

Barnard said he’s confident that the indoor farming industry will continue to expand.

“I can’t predict what the venture industry will do, nor what the USDA will do given the current state of federal budgeting, but we’re confident that this will be a prominent form of agricultural practice for many crops much sooner than even we projected a few years ago,” he said.