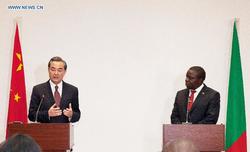 As all-weather friends, China and Zambia have continued to maintain a long-term mutually beneficial cooperation in various sectors including agriculture.

The summit, which was strategically hosted alongside the 91st Zambia Agricultural and Commercial Show, was aimed at pushing forward the agricultural co-operation between China and Zambia, as well as contributing to the development of the agricultural sector of Zambia.
It is a bare fact that over the years Zambia and China have proved to be well-matched partners in agricultural development.

The compatibility stems from the fact that while Zambia is endowed with favourable natural conditions and fertile land for agriculture development, China has a cutting edge in capital, technology and experience.

For instance, Zambia has a fertile arable land of 43.2 million hectares, with 3.23 hectares per person. Zambia is also richly endowed with water resources, possessing 25 percent of the surface water and 45 percent of the underground water in Southern Africa. Sunlight is also abundant in Zambia and the average duration of sunlight per year exceeds 2,500 hours.
Furthermore, there is a sharp contrast in temperature between day and night in Zambia, which is suitable for the growth of various kinds of crops.

While Zambia is endowed with all these natural resources and conditions favourable for agricultural development, it has in the past struggled to fully actualise its agricultural potential due to limited financial, technological and skills capacity.

Thankfully, this is what China is bringing to the table and the co-operation between the two countries has already started bearing fruits.

Chinese Ambassador to Zambia H.E Mr Yang Youming, in his speech during the China Africa Agriculture Cooperation and Development Summit, brought to the fore the great achievements born out the agricultural co-operation of the two countries under the framework of the Forum of China-Africa Co-operation (FOCAC) in recent years.

Mr Youming, who noted that agriculture is a key developing sector for both China and Zambia, said the two countries have made tremendous progress in the following areas:

Agricultural infrastructure projects
Under Agricultural infrastructure projects, Mr Youming said the Chinese government provided a concessional loan and assisted the Zambian government in building 9 large-scale silos, which have since alleviated the shortage of storage capacity for the agricultural products in Zambia.
He said the China-aid borehole project has entered into the second phase, with an aggregate total of over 1,000 boreholes for Zambian rural areas.

The ambassador disclosed that so far over 700 boreholes have already been completed and are used to provide clean water to tens of thousands of Zambian rural population.
He also revealed that the investigation of the 3 China-aid large-scale milling plants has been completed and the actual construction will start soon.

He estimated that over 500 Zambian participants so far have received training in China through this program.

He also disclosed that the China-Africa Cotton Development Limited is leading in the development of cotton growing in the Eastern Province, and has created an agricultural industrial park close to Chipata, which has been recognised as one of the first batch of overseas agricultural product processing zones by the Chinese government.

He further said another Chinese firm, the Jihai Agricultural Investment Group runs a mushroom plant in the Lusaka East multi-function Economic Zone, and has opened a market for agricultural products in Lusaka.

In view of the above achievements, Mr Youming noted that the agricultural co-operation between China and Zambia has gone beyond the exploratory stage and has now entered into a fast development period.

The ambassador also highlighted that at the FOCAC Johannesburg Summit held at the end of 2015, Chinese president H.E. Mr. Xi Jinping announced the Ten China-Africa Co-operation Plans, among which the China-Africa agricultural modernisation plan is one of the most important components.

He said China will continue to encourage Chinese enterprises to invest in large-scale farming, animal husbandry, grain storage and processing in Africa.

He added that China also intends to carry out agricultural development projects in 100 African villages to raise rural living standards, send 30 teams of agricultural experts to Africa, and implement the “10+10” co-operation project between Chinese and African agricultural research institutes.

As noted by Mr Youming, it is indisputable that with time the agricultural cooperation between China and Zambia will yield more extensive and fruitful results.

The ambassador concluded his speech with a call to Chinese entrepreneurs to seize the opportunity of the moment to exploit the Zambian market and develop mutually beneficial cooperation.

He said this will improve the internationalisation and diversification of Chinsese enterprises, and at the same time accelerate the development of the Zambian agricultural sector and subsequently improve the livelihood of the rural areas of Zambia.