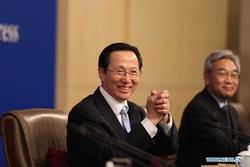 China has approved plans to establish international agricultural demonstration zones in 10 ountries, the agriculture ministry said on Monday, as Beijing looks to extend its influence in the global farm sector.

The projects include an agriculture technology park in Laos, an agricultural products processing zone in Zambia and a fisheries park in Fiji, the ministry said in a statement on its website.

The demonstration zones are based on existing projects set up by Chinese firms, which will be given government backing to serve as platforms for other Chinese companies.

China also approved 10 pilot agricultural parks at home, which will be open to overseas investment. They are located in coastal, river and border regions to help encourage overseas cooperation and local connections.

The agricultural parks are part of China's Belt and Road initiative, an ambitious plan to expand infrastructure and trade links between Asia, Africa, Europe and beyond.

China said in November it would launch the projects to boost cooperation with foreign firms, help its companies make better and less risky overseas agricultural investments, and bring in
international experience and technology.

The plan was also highlighted in the government's first policy statement this year, which said it would encourage exports and support companies to set up overseas production
bases.