by Sue Branford and Maurício Torres 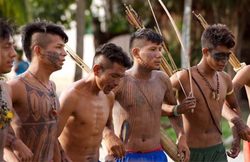 Munduruku warriors. The Munduruku have battled for years with the Brazilian government to get their lands formally demarcated, as have many other indigenous groups. Temer’s actions are likely to make that fight more contentious, with an escalation of violence, as the ruralistas are emboldened to oppose indigenous territory claims. Photo: Mauricio Torres

A storm of protest greeted the 19 July announcement that Brazilian President Michel Temer has approved a recommendation made by the Attorney General’s office (AGU), that federal government bodies should adopt new criteria for setting the boundaries of indigenous land.

Respected lawyer Dalmo de Abreu Dallari, who headed the University of São Paulo’s legal faculty for many years, said that the recommendation was a “legal farce,” with the objective of “extorting from the indigenous communities their right to the land they have traditionally occupied.”

But the bancada ruralista rural caucus in Congress is triumphant. Federal deputy Luiz Carlos Heinze, a leading member of the caucus, celebrated the AGU recommendation, saying in a video circulated on social media that it will lead to a reassessment of more than 700 cases, resulting ultimately in the dismissal of 90 percent of ongoing indigenous territory land claims.

The Civil Office of the Presidency has already returned to the justice ministry 19 indigenous territories, covering 792,370 hectares (3,059 square miles), which were close to completion, saying that the recognition of these reserves is to be reviewed. With the process for recognizing many of the other new territories at an early stage, it is impossible to calculate precisely how much land is involved.

However, if created, the new reserves would undoubtedly add millions of hectares to the 177 million hectares (683,400 square miles), 13.8 percent of the Brazilian territory, that is in indigenous hands. By far the largest share — 98 percent of all indigenous territory — is located in the Amazon, where the reserves prove an effective bulwark against deforestation. The long process of recognizing indigenous ownership is not complete in all these territories, so some of these lands could become vulnerable to reclassification.

The most controversial aspect of the AGU’s recommendation is the introduction of the so-called “marco temporal” an arbitrary cut-off date for land claims.

Under the new measure, Indian groups will only have the legal right to claim traditionally held territory that they were physically occupying as of 5 October 1988, the day the most recent federal Constitution was approved — a date, historians point out, by which many Indian groups had already been forced from their lands.

The concept of “marco temporal” was first adopted by the Supreme Federal Court (STF), when it settled a long, contentious dispute over boundaries for the Raposa/Serra do Sol indigenous reserve in Roraima in 2009.

The Dilma Rousseff government, with its strong anti-indigenous bent, was keen to make this cut-off point vinculante, a norm to be universally followed for establishing other indigenous territories in the future, and the AGU issued Portaria 303/2012, an order to that effect. However, STF minister Ricardo Lewandowski, in a 2013 ruling, made it clear that the 19 conditions for such settlements — including the “marco temporal” — could not legally be applied to the demarcation of all indigenous lands. This decision, combined with strong indigenous pressure, led to Portaria 303’s eventual revocation.

The rural elite, however, never accepted the high court’s finding. It wanted the criteria, especially that referring to the “marco temporal,” along with another that forbids the enlargement of indigenous territory already marked out, to become vinculante, the norm and extended to all future cases.

Importantly, the AGU’s July recommendation also makes it possible to undertake “strategic” public works, such as hydroelectric dams and roads, without Indian consent. This seems to be a direct breach of the International Labor Organization’s 169 Convention, signed by Brazil, in which nations commit to full consultation with indigenous people whenever a public work will affect their land or way of life.

Protests against the AGU’s recommendation, particularly the 1988 cut-off date, have been vociferous, despite the huge amount of civil strife already unfolding in Brazil — with landless peasants occupying elite estates, including one owned by the family of agriculture minister Blairo Maggi, and with President Temer’s legitimacy threatened by serious corruption charges.

Journalist Rubens Valente, who has just published a book about Brazilian atrocities committed against Indians during the military dictatorship, called Temer’s July decision “a 50-year setback. It’s as if the International Labor Organization’s 169 Convention didn’t exist.”

Well-known forestry consultant Tasso Azevedo, former director of Brazil’s National Forest program under the Lula government, fumed: “Imagine a Polish law that said that the claimant — for example, a Jewish family persecuted during the Second World War — could only get their property back if they were living in the house when it was expropriated? It would be seen as absurd.” He went on: “The AGU recommendation shreds indigenous rights. You want a road? No need to ask. Just go ahead and do it.”

Others point to the tragic predicament of Guarani Indian groups in the state of Mato Grosso do Sul. These indigenous people were forcibly evicted from their territories after the state government sold their land to farmers. For years they’ve struggled to regain their territories and many still squat at roadsides, barred by fences from moving back onto their land. But because they were evicted before 1988, the AGU recommendation would negate all claims.

Lawyer José Afonso da Silva, a specialist in constitutional law, also questions the validity of the 1988 cut-off date: “the beginning of the legal recognition of indigenous rights was in June 1611 with the Royal Charter (Carta Régia) promulgated by the Portuguese king Philip lll … All other constitutions continued along these lines. The 1988 Constitution just carried on this tradition.” Based on these legal precedents, he says, there is no reason to give that date a special status — unless, critics say, the government’s plan is to deprive indigenous people of their demarcation rights in order to legitimize land thefts that occurred before that date.

Many other legal experts have protested. Érika Yamada, an independent United Nations indigenous expert, says that the recommendation “exceeds all limits of administrative law, because the president is signing a recommendation that is an attempt to legislate, to alter the 1988 Constitution.” She argues that the new measure is unconstitutional and may well lead to challenges in the ILO, the Organization of American States and the United Nations.

Indigenous organizations have already called for a legal counteroffensive. The Indigenous Council of Roraima (CIR) will be challenging in the courts the legality of actions that replicate the “unconstitutional” conditions established in the Raposa/Serra do Sol case.

These legal challenges may well succeed, but that will take time. Meanwhile, serious damage could be done to indigenous groups. Temer has already said that he expects FUNAI and other government bodies to start implementing the AGU guidance.

The risk of escalating violence

There is another concern: Valente believes that the new criteria could catalyse unrest in the countryside, which is already at record levels: “The Indians want to regain their old lands and they are increasingly well organized.… The AGU recommendation may well provoke violence, as it is telling these groups that the doors are closing for them to get what they want through the justice system or from the executive.” The recommendation could also embolden land grabbers eager to exploit indigenous demarcation disputes, experts say.

Azevedo has no doubt why the president approved the AGU recommendations: “Temer endorsed the ruling for the worst possible motive: to buy political support in Congress so that he won’t be tried for corruption by the Federal Supreme Court.”

Indeed, the rural caucus has made no secret of the role it played in Temer’s rise, and that it could play in his fall. In the already mentioned video, Luiz Carlos Heinze revealed that the AGU recommendation was agreed to in an April meeting between then Justice Minister Osmar Serraglio (a leading member of the rural caucus), Presidential Head of Staff Eliseu Padilha, and Federal Attorney General Grace Maria Fernandes Mendonça. The three made a pact, he claims, that represents “a great advance for all Brazilian [agribusiness] producers who have been feeling frustrated and anxious because of the pressure they have been receiving from FUNAI” to vacate lands they’ve claimed for years.

Experts see the AGU recommendation as just one bargaining chip being used by Temer, an experienced Congressional operator, to make sure he gains sufficient votes in the Lower House to prevent a two-thirds majority from voting that he should be tried by the Supreme Court for the corruption accusation made against him by the Attorney General. That crucial vote is scheduled for this Wednesday. The latest opinion polls show that 81 percent of Brazilians want Temer tried for corruption.

Environmental protection also appears to be an expendable pawn in Temer’s congressional game.

In recent weeks, the president allowed his environmental minister, José Sarney Filho, to introduce a bill to reclassify a large portion of Jamanxim National Forest in the Amazon allowing economic activities within it — including logging, ranching, farming and mining — a dismemberment for which the rural elite has long lobbied, and that would legitimize land grabs underway there for years.

Previously, Temer planned to achieve this goal via a provisional measure (MP 756), which he himself proposed, but which in the end, he was forced to veto in the face of intense national and international pressure.

Groups at home and abroad are now campaigning hard to stop the newest Jamanxim dismemberment bill, which would reclassify an even larger part of the forest than the original provisional measure­­ –– 349,000 hectares (1,347 square miles). But this time the counterattack may not be as effective, because bills of this kind only require congressional approval and are not subject to a presidential veto.

The runaway power of the rural caucus in congress and within the Temer administration, and the ruralistas growing confidence that they will not be held accountable, is now having serious consequences for the environment, Indians, quilombolas (those living in communities set up by runaway slaves), peasant farmers and other rural inhabitants.

According to Global Witness, more rural and environmental activists have been killed in Brazil than in any other country in the world over the past five years. Moreover, nine out of ten murders occurred in Legal Amazonia, with most in Rondônia and eastern Pará state. There were 47 total homicides in the Amazon in 2016, with 33 in the first five months of this year, putting 2017 on track to be the bloodiest year in recent Amazon history.