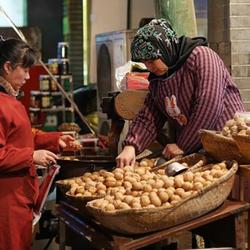 After a series of high-profile acquisitions and more likely on the way, China is poised to have a much larger footprint in the global food supply chain in the near future, according to a new report from Rabobank. The report highlights six acquisitions from the last six years that demonstrate China’s agricultural priorities and perhaps predict the role the world’s most populous country is seeking on the global agriculture stage.

The sense of urgency around feeding China’s 1.4 billion people has been leading to deals both private and public for the last several years. In April, Alex Zhang, cofounder and management partner of Beijing Hosen Investment Management (Hosen Capital), who has invested $300 million in food and agribusiness-related companies that are either located in China or are directly involved in meeting Chinese demand, told AgFunderNews, “The whole industry is modernizing at a speed we haven’t seen in Chinese food industry history, and if we follow a similar pattern in the way the U.S. food industry evolved in the past, we are now at the stage that we will see more and more sector consolidation. We will see more trade sales and large Chinese food companies will continue to go global,” said Zhang. “Our food industry will evolve in a similar fashion to our internet industry where four of the world’s top 10 companies are Chinese; we will probably see something similar in 10 years’ time in the food industry.”

The Rabobank report posits that China’s acquisitions are not simply meant to give the country more global superiority in terms of food production and ag-related holdings, but also to meet specific goals within the nation’s own food supply.

According to the report, China’s crop yields have a way to go. Yields for corn, soybeans, and wheat in China are growing at a slower rate than producers globally. For example, the report forecasts that Chinese corn production will reach 6.37 tonnes per hectare by 2026 while the U.S. will reach 10 tonnes per hectare.

The report names ChemChina’s acquisition of Syngenta as a leading sign of this focus. In China’s largest foreign takeover to date, ChemChina announced the intended buyout of Syngenta, with the blessing of shareholders, in February 2016 and finished obtaining 98% of the company just this month, in a deal totaling $43 billion. A few more legal hurdles remain such as canceling the remaining 2% in stock and delisting the company from the Swiss Exchange, but the massive takeover is essentially done.

“The combination of ChemChina’s acquisition of Syngenta’s seeds and agrochemical assets, and China’s own germplasm base, traits, and related technology makes for an excellent foundation to achieve this goal,” said the report.

The most recent major agricultural acquisition by a Chinese company further supports the goal of upping yields. In July, CITIC Agri Fund purchased Dow’s Brazilian corn seed operation including seed processing plants and research centers, a copy of Dow AgroSciences’ Brazilian corn germplasm bank, the Morgan seed brand, and a temporary license for the use of the Dow seed.

In addition to souping up China’s commodity production, the country is looking to support another key part of its domestic food supply; China may be able to meet the majority of its demand for meat through domestic production, but its animal feed is largely imported.

As in most developing nations, meat consumption is up, and this relies on a feed crop that China is not quite as skilled at producing: soybeans. The government has expressed a desire to increase soybean acreage by more than 30% by 2026, and several acquisitions have made this appear more likely.

The report details three of these: COFCO’s acquisition of Noble Agri, a Singaporean supplier of agricultural and energy products, and Nidera, a Dutch grain trader, both with an eye toward trading. Also major Chinese meat processor Shuanghui purchased U.S. pork giant Smithfield in 2013 — along with 146,000 acres of U.S. farmland — for $4.7 billion, which the report argues is to further supplement animal protein supply.

The report further says that future investments will likely focus on “technology that improves livestock productivity.”

The report also gives a nod to China’s amassed capability for arbitrage — buying and selling products at the same time to turn a profit. Not only may China be able to secure its domestic food production through these acquisitions, but it may also be in a position to play a global role in the pricing and supply of agricultural products and inputs.

Plus, through the sheer force of its power as an importer, logistics and even food safety are also at the country’s fingertips. Case in point: After the Trump administration successfully convinced China to lift the ban on beef imports from the U.S., it has become clear that Chinese restrictions on common cattle feed additives will either require a costly conversion by U.S. ranchers or keep the U.S.-China beef trade in niche territory. The U.S. poultry industry is currently seeking the same opportunity.