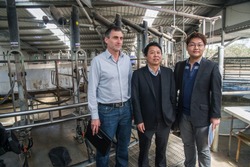 Even before Lu Xianfeng completed the $280 million purchase of Australia's largest dairy farm in April 2016, the Chinese billionaire was looking to sell.

In a messy proposal, Mr Lu planned to offload his holding in the historic Van Diemen's Land Company (VDL) to a Chinese listed vehicle he controlled and raise some cash through a share sale.

It would have taken some of the financial pressure off the businessman who, according to Chinese company records, had funded the entire purchase of 25 dairy farms in north-western Tasmania through debt.

But his deal never happened. China's sharemarket regulator blocked it, raising doubts over a pledge made to the federal government to invest a further $100 million in the dairy operation and create an additional 95 jobs.

These promises had been trumpeted by Treasurer Scott Morrison when he approved the sale in February last year and were cited as a major reason why Moon Lake passed the crucial "national interest test".

"It [Moon Lake's purchase] will ensure increased employment and investment in an important industry sector in Tasmania," the Treasurer said in a statement.
But in the 16 months since Moon Lake took control of VDL, little of this promised investment has happened, according to one insider.

"They promised significant amounts of money would be invested... it's still early days but nothing has happened so far," he said.

Another insider said Moon Lake was still committed to the additional investment, but the timing wasn't right at present as the industry was plagued by over-supply and weak milk prices.

While Moon Lake's big promises to the federal government are not binding, they do raise the issue of how little scrutiny is given to the financing behind Chinese foreign investment coming into Australia.

Mark Harrison, a senior lecturer in Chinese Studies at the University of Tasmania, said an unsophisticated view of China prevailed in state governments and they did not seem to understand the need for basic due diligence on mainland companies buying assets in Australia.

"In their enthusiasm to attract Chinese investment, local policymakers have not stopped to ask basic questions about who these people are, what they are offering and whether this can actually be delivered," he said via phone from Hobart.

Moon Lake's managing director Sean Shwe said the company had fulfilled all the basic commitments made to the federal government and the board would finalise its capital expenditure plan by the end of August.

"We will then put this to the owner [Mr Lu] and see what capital is available," he said via phone from Perth. "That said, he has made commitments to us … our strategy has not changed."

The issue of Moon Lake's lofty promises still being a work in progress can be partly explained by the curious way in which Mr Lu, a window blind manufacture from the regional city of Ningbo, came to own one of Australia's oldest and most storied farms – the land was granted to VDL by King George IV in 1824.

According to those involved in the sale, Mr Lu bought the dairy operation after a single three-hour visit in November 2015.

"He stood on a hill overlooking Cape Grim and smiled," says one source. "It was a perfect clear day with virtually no wind. The fields were green ... it is a very special view at that time of year."

Mr Shwe said Mr Lu fell in love with the property and he agreed the sale process was quicker than usual.

But despite Mr Lu's marvelling at the rugged beauty of Tasmania's north-west coast, those involved did not see him as a serious bidder as he'd come late to the sales process.

"No one thought he'd have enough time to make a bid," said the source.

Then, to the shock of most involved, less than two weeks later Mr Lu offered a knockout bid of $280 million for the dairy group.

"It was very clear he [Mr Lu] had done no due diligence and knew nothing about the business," said one person involved.

His offer was at least 10 per cent above the under-bidder and nearly $60 million more than a group of seasoned industry professionals had been prepared to pay.

It was the ultimate in cavalier Chinese deal making, but such haste has now put Mr Lu and his Moon Lake Investments under a degree of financial pressure, as industry conditions have deteriorated and the policy environment in China has become more difficult for those looking to invest overseas.

On Monday's China's Vice-Minister for Commerce, Qian Keming, said overseas investment had fallen by 43 per cent in the first half of the year and "irrational" offshore deals had been contained.

This push from Beijing, which is partly an effort to stem capital outflows, could make it harder for Mr Lu to fund his promise of an additional $100 million of investment in VDL, while also making it more unlikely China's sharemarket regulator would reconsider vending the asset into a listed vehicle.

It leaves the Chinese businessman carrying a barely profitable business in need of major capital spending just to keep it operating at a time when funding conditions on the mainland are getting tighter.

But he's not alone.

Moon Lake is just the latest example of a Chinese buyer borrowing heavily for a fully priced asset in Australia, even as it scrambles to shore up funding at home.

The Australian Financial Review revealed last month the new Chinese owner of Darwin's Port, the Landbridge Group, was in a similar situation.

It borrowed heavily to purchase the lease over Australia's most northerly port and is now struggling to make interest payments, putting in doubt its promise to upgrade the port and build a $200 million hotel on a nearby site.

The investigation showed Landbridge and its founder Ye Cheng did not fit the stereotype of a cashed-up Chinese billionaire with access to cheap funding from state-owned banks.

In Moon Lake's case the reluctance to push the button on promised investments, which are forecast to double milk output from VDL, can be partially explained by depressed prices, but also by the curious deal to on-sell the company in China.

"The sale was always intended but never disclosed," the insider said.

And the first that many staff at VDL knew about the plan was when a dozen Chinese investment bankers appeared at the company's Tasmanian headquarters in the weeks after Moon Lake took control.

If the deal had been approved Mr Lu would have emerged with around 44 per cent of Ningbo Xianfeng New Material Company, which in turn would have been the ultimate owner of VDL.

Crucially, however, the purchase price was only 1.18 billion yuan ($236 million) or 16 per cent less than Mr Lu had paid.

This suggests there was push-back on price from investors, even before the regulator intervened.

Company filings in China also show shareholders in New Material guaranteed $220 million in lending by Mr Lu for the purchase of VDL, while there was also a $70 million loan from Rabo Bank in Australia.

Those amounts are very similar to the ultimate purchase price and indicate the acquisition was funded almost entirely by debt, a high- risk strategy given the volatile nature of agriculture.

Mr Shwe said he could not speak to the overall balance sheet of Mr Lu or say how the acquisition of VDL was funded.

On putting VDL into a listed vehicle in China he said: "We wanted to access a bigger balance sheet and create a vertically integrated company.

"They [China's securities regulator] said come back when the profitability improves."

In rejecting the transaction in December 2016 China's securities regulator, the CSRC, said there was a "relatively high uncertainty over the profitability of the asset".

Documents filed ahead of the failed deal showed Mr Lu planned a share placement to two Chinese private equity firms that would have raised about $65 million in cash.

Given the cash injection never happened it raises further questions about the funding of VDL and Moon Lake's promises of additional investment into Tasmania.

One person with knowledge of the business said Moon Lake was slow approving basic spending to keep the farms operating and this suggested there was a degree of financial pressure.

"They thought they were buying something with consistent, secure and positive cash flows, which shows a complete lack of understanding of the industry," the person said.

Mr Shwe said the business "basically broke even" on a cash basis last year, yet others said this was misleading as more than $20 million needs to be spent over the next three to five years on basic capital expenditure to keep the farms running.

This does not include the bigger projects to increase production, although Mr Shwe said they were in the process of replacing two of the oldest dairies.

At the same time industry conditions have been tough.

Just weeks after taking control of VDL the contracted milk price was cut by 10 per cent and the region experienced one of its worst dry spells on record. This has improved somewhat, but are not back to levels four years ago.

The other issue is that Moon Lake partly based its business case for buying VDL on a document prepared by the seller, Taranaki Investment Management Limited, which contained many heroic forecasts.

"That document very deliberately had no input from management," said another person involved.

This so-called "Model of Future Performance" used figures from the 2013 and 2014 financial years when milk prices were as much as 30 per cent higher than current levels and VDL was making about $10 million a year in profits.

But the performance in these two years belied its history of losses and the need for substantial capital expenditure.

"It [VDL] had always struggled to generate positive cash flow," said one source.

Moon Lake believed it could bank the $10 million in annual profits and grow the business substantially through air freighting fresh milk to China with the boast it came from a region with the "cleanest air in the world".

Its claim about the world's cleanest air is true, but Moon Lake's plans to fly fresh milk from Hobart to mainland China are still yet to be realised 10 months after they were announced.

Instead it is flying far smaller volumes out of Melbourne. Mr Shwe said it was still committed to direct flights from Hobart but could not say when this would happen.

He said regulatory hurdles remained, but part of the issue also appears to be price.

It is offering consumers in Beijing, Shanghai and surrounding provinces eight litres of fresh milk over a month for 618 yuan or around $14.30 a litre.

That compares to $10.20 a litre for fresh milk from the better known A2 Milk Company.

One person involved said Moon Lake quickly released they couldn't make money even selling fresh milk into China at $10 a litre, so they need to get a "premium on the premium".