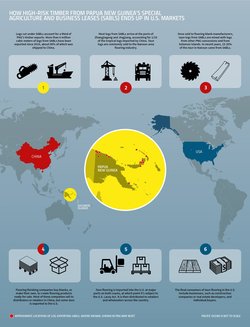 How high risk timber from Papua New Guinea ends up in U.S. markets

The South Pacific nation of Papua New Guinea (PNG) is home to the largest remaining tropical rainforest in the Asia-Pacific region, and one of the biggest land grabs in modern history.

Between 2014 and 2016, Global Witness traced a supply chain spanning some 9,000 miles from the PNG’s forests to retail shelves in the U.S.

Stained Trade reveals for the first time, how companies along wood product supply chains leading through China are failing to screen out illegal timber, the risks this creates for U.S. companies, and the devastating impacts the trade is having on people in PNG.

Indigenous communities across PNG are seeing their livelihoods and environment destroyed as ancient rainforests are cut down by foreign-owned logging companies. We found that exotic wood products sold in American stores may be driving the theft of indigenous people’s land and deforestation in PNG, as well as potentially violating U.S. law.

We interviewed dozens of people who have lost their land to loggers. They include Paul Pavol, a landowner-turned-activist who won an international award for environmental and human rights activism last year for his struggle to protect his forests from one of the world’s largest logging companies.

Pavol says the lease his government used to give away his land to logging and oil palm interests involved fraud and forgery. He is challenging it in court, but faces an uphill battle in the face of police intimidation, legal harassment, and a vastly better-funded adversary.

People throughout PNG are being illegally stripped of their land by their own government. Widespread abuse of a land-leasing scheme has seen 12% of the country given away to mostly foreign-owned logging and agribusiness interests for up to 99 years.

The government of Prime Minister Peter O’Neill has been promising for years to cancel illegal leases, after an independent inquiry documented widespread violations of indigenous land rights, but has failed to follow through. Clear-cutting of forests under the leases is destroying sources of food, water and medicine on which indigenous communities rely.

Our investigation shows how the global timber trade is driving deforestation and abuses of indigenous communities’ rights in PNG.

Most rainforest logs exported from PNG are shipped to manufacturing hubs in China, with much smaller amounts going to other countries including India, Japan, South Korea, and Vietnam. Finished commercial products made in China are sold domestically or exported around the world. The U.S. is the biggest buyer of wood products from China, among them flooring made out of wood from PNG.

The U.S. and Europe have laws in place prohibiting imports of illegal wood. But the lack of equivalent measures in China creates risks for American and European importers of wood products made in China, as demonstrated by a recent criminal case involving U.S. flooring giant Lumber Liquidators. Last year the company agreed to pay US$13 million in penalties after U.S. authorities caught it importing Chinese-made flooring linked to illegal logging in Russia, in violation of the U.S. Lacey Act.

Could rainforest timber be in your home?

Our investigators traced the path of one of PNG’s most commonly exported species, taun, from its arrival in China at huge timber ports on the Yangtze River, to the sawmills and manufacturers of Nanxun, the country’s largest solid wood flooring hub.

Most taun flooring is sold domestically, but significant quantities are exported to the U.S. We found that certain American and Chinese companies were selling taun flooring without taking the necessary steps to ensure it was legal – despite the U.S. ban on the trade in illegal timber under the Lacey Act.

We identified ten U.S. companies selling taun flooring, including hardware giant Home Depot and a U.S. subsidiary of one of China’s largest flooring companies, Nature Home. We wrote to all ten companies asking what measures they take to ensure the taun in their products is legal and did not involve deforestation or land rights violations against indigenous communities.