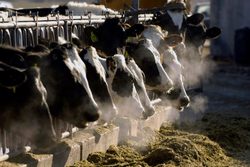 Vientiane is cooperating with distributors in Vietnam's Ho Chi Minh City to expand the numbers of cattle for beef supply grown on rural land of the capital for domestic consumption and export.

Vientiane is seeking farmland to expand the numbers of cattle raised after the Vietnamese city presented 45 cows and five bulls to boost cooperation and strengthen the relationship between the two parties.

Some 10,000 vials of bull semen and equipment for livestock care and breeding were also presented.

The total value of cows and bulls is more than US$700 million, a Vientiane Livestock and Fisheries section official told Vientiane Times yesterday.

The Vietnamese side has requested the supply of hundreds head of cattle per day from producers in the Lao capital after the two parties signed a contract to that effect.

Cattle farms to raise these cows should be those that reach regulatory standards, boast guaranteed pens for stock and adequate land for growing grass for feed, authorities said.

The farms should also have livestock technicians to monitor animal health, breeding and disease prevention.

At present, there are 25 farms registered in Vientiane, with more proposed pending inspection and approval.

However, the capital currently must import beef cattle from abroad and the provinces especially southern provinces to supply the market. Vientiane cattle breeders are only able to supply some 40 percent of export demand at present.

Local farms have only been able to meet about 10 percent of the domestic market demands according to Vientiane Cattle Breeding and Entrepreneurs Association.

To breed cattle for beef supply and export, the association on behalf of the government is seeking more funds to purchase equipment, grass, seeds, and breeding stock.

The association plans to import 2,000 cows from Australia to breed which will also help supply demand in both domestic and neighbouring markets.

The capital still has suitable land and natural resources to breed cattle for commercial purposes but limited capital to promote and implement such projects.

Vientiane is allocating 1,500 hectares of farmland along the That Luang marsh channel to grow the feed grasses needed for cattle raising, according to the association.

If the project aims can be achieved the capital will be well placed to produce sufficient beef to increase supply to the domestic market and export, the association believes.