Agriculture as an asset class

Agriculture as an asset class


by Michael DeSa, Founder/CEO, AGD Consulting
Agriculture is one of the oldest asset classes in the world, time tested and proven to weather economic uncertainty. Within agriculture, farmland has historically proven itself as a tangible, stable storage of wealth, appreciating approximately 3.5 percent annually over the last 30 years.
A Global Farmland Index recently developed by Savills World Research, an index based on data from 15 key farmland markets across the globe, recorded an annualized growth since 2002 of 14.8 percent. The strong, steady growth highlighted by the index also illustrates a reduced volatility, characteristic of the asset class. A direct comparison between farmland and other global commodities shows farmland values were less volatile than other commodities and were significantly less affected by the credit crunch in 2008.
When compared to other selected asset classes within the U.S. markets and global commodities, farmland and timberland have upheld their reputation as high-returning, low-risk asset classes.

A further assessment between farmland and the S&P 500, the market index that represents roughly 70 percent of all stocks publicly traded, shows that farmland investments dramatically outperformed the S&P 500 Index over a 15-year span. As the graph below also illustrates, the 2008-2009 financial crisis had virtually no impact on the NCREIF Farmland Index’ investment value, further highlighting agriculture as a secure, stable alternative uncorrelated with the equities market.

The fundamentals of agriculture are some of the most promising characteristics of this asset class. With the global population expected to reach 9.7 billion people by the year 2050, the development of a robust food system will be crucial to ensuring a sustainable and prosperous future. This increase in global population will require a 60 percent increase in the demand for food production. Where will this growth in food production come from? While U.S. agricultural markets may be an investor’s first solution, they may not be the most lucrative market for an agricultural investment.
Potentially productive U.S. agricultural land is being developed at a rapid rate and as a result of this shrinking supply, prices for remaining farmland are increasing. From 2007 to 2012, nearly 3.5 million acres of rural land in the United States was converted to non-agricultural uses. During that same time period, according to the USDA’s 2016 Land Value Summary, U.S. farm real estate, cropland, and pasture land rose in price per acre an average of 17 percent. 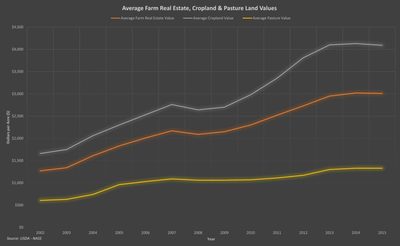 The relative ease of agricultural transactions in the U.S. has more investors chasing the same shrinking pool of opportunities, further reducing supply and continuing to drive up prices. Investors bold enough to diversify with an overseas agricultural investment can find plenty of untapped opportunities, strong upside potential, and an industry poised to not only support, but profit from the rise in global population and corresponding demand for increased food production.
Opportunities and Risks in Latin American Agriculture
The multi-faceted investment opportunities in Latin American agriculture provide an assortment of alternatives for a variety of investors – private, institutional, family offices, and High Net Worth Individuals (HNWIs). Ideal climate, quantifiable soil productivity, and an immature agribusiness market creates opportunities that the U.S., as a fully developed market, can hardly present. These conditions present a growth potential offered by Latin American agriculture that is hard to match in other parts of the world.
A critical consideration when researching agricultural land as an investment is the availability of arable land and sufficient water resources in that region to support sustained agriculture.  The Latin American region is home to the world’s greatest agricultural land and water availability per capita. Comprising only 15 percent of the world’s land area, Latin America receives nearly 30 percent of the world’s precipitation and is home to almost 35 percent of globally available renewable resources[i]. As you can see from the image below, much of Latin America has a water stress level (ratio between withdrawal and availability) between 0 and 0.3.  Essentially, there is very little competition or stress between the amount of water being consumed by the population and its availability in the environment. The same cannot be said for the United States.
[i] Inda Flachsbarth, Barbara Willaarts, Hua Xie, Gauthier Pitois, Nathaniel D. Mueller, Claudia Ringler, and Alberto Garrido.  “The Role of Latin American’s Land and Water Resources for Global Food Security:  Environment Trade-Offs of Future Food Production Pathways”, PLOS One, U.S. National Library of Medicine National Institutes of Health, January 24, 2015, http://www.ncbi.nlm.nih.gov/pmc/articles/PMC4305321/, May 20, 2016. 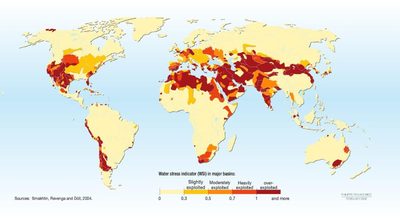 One very compelling point of differentiation between U.S. and Latin American farmland is price. A 2016 Iowa Land Value Survey found the average price of Iowa farmland, some of the most productive and sought-after farmland in the U.S., was approximately $7,183 per acre[ii].  Compare that, for example, to the average price per acre for top quality, fertile farmland in Uruguay at $4,850 per acre or productive cropland in Argentina for $3,600 per acre and these price points become hard to ignore. As the graph below shows, the average price of varying types of agricultural land in several different Latin American countries is extremely competitive against current U.S. agricultural land prices.
[ii] Wendong Zhang, “2016 Farmland Value Survey Iowa State University”, Iowa State University Extension and Outreach, 2016, https://www.extension.iastate.edu/AGDM/wholefarm/html/c2-70.html, January 2, 2017. 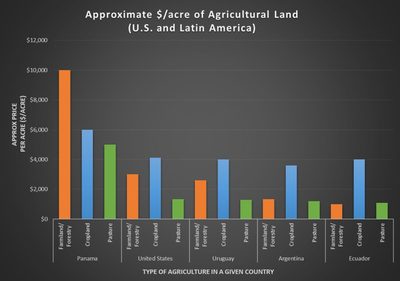 It’s important to note here that Panamanian land prices are influenced by the country’s excellent foreign investor and business practices, their longstanding and proven track record of excellent agricultural practices, their proximity to the U.S. and ease of export, and their use of the USD as a primary currency. Uruguay, Argentina, and Ecuador, on average, offer more affordable land prices than their North American counterpart.
When considering U.S. versus emerging market investments, one of the key differences is the risk profile an investor is willing to assume. An investment in Latin American agriculture, for example, may present a higher risk profile, but these risks are becoming increasingly easier to understand and mitigate. To minimize these risks, as with any investment, investors need to first parse emerging market risk at a country-level first, then isolate specific, often localized risks that may not be readily apparent at the country-level assessment phase. This is particularly true in the resource/agricultural sectors. Some of the greatest risks revolve around politics, macroeconomics, and rule of law. While there is little that can be done to manage political and macroeconomic risks, investors need to fully assess these environments, understand all possible scenarios, and make the right trade-off for themselves between potential risks and reward.
Understanding a country’s legal framework is crucial to protecting and insulating the investment as much as possible. This is where sound legal assistance is an absolute must. The right representative can provide you with advice concerning titling issues, cultural differences, and connect you with governmental agencies to apply for special investor programs. Potential investors should seek counsel from someone with international investment experience as local advisors may tend to favor loyalty to their local network more than finding the investment that best suits your needs. Finally, a failure to understand the culture of the country you’re investing in is a recipe for a failed investment. Essentially, an absentee investor is asking the surrounding community to watch over their investment while they are away, something that’s not possible without their support.
Original source: Global AgInvesting
TWITTER
FACEBOOK
WHATSAPP
PRINT
E-MAIL
TWITTER
FACEBOOK
WHATSAPP
E-MAIL