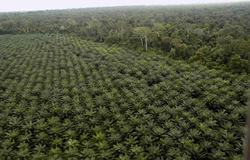 “In these supposedly win-win contracts, I would like to know what our communities are gaining. On the contrary, we are losing and even dying a slow death.” With this cry of despair, Célestine Ndong (1) describes the bitter situation in Mouilla, Gabon, where the GRAINE [“seed” in French] program has been underway for several years.

This program—launched with financial support from the FAO—covers 200,000 hectares of community-occupied land (3, 4). The program says that of these 200,000 hectares, 120,000 will go to small-scale farmers and 80,000 to industrial agriculture.

The rural and agricultural development company (SOTRADER, by its French acronym) is a key actor, and OLAM Gabon is its technical adviser. This joint venture, which is 51 percent owned by the Gabonese State and 49 percent owned by OLAM International, is the “backbone” of the program.

The lack of clarity between the entities involved makes it difficult for Gabonese communities and citizens to distinguish between them. For many people, GRAINE is nothing more than OLAM Gabon’s justification to continue controlling the country, as it has been doing since 2010 (5). Its strategic objectives are not only focused on oil palm, but also on rubber, timber and other resources.

On the GRAINE page of OLAM’s website, one can read what it says about this initiative that celebrates agribusiness, in a country struggling to overcome dependency on basic food imports for its people (6). These imports cost the country about 300 billion CFA francs per year [around US 514 million dollars] (7).

On Wednesday February 8, 2017, we went with a group of peasants and Gabonese and international civil society organizations toward Mouilla-Fougamou, to see the results of OLAM and its partners’ promises.

Rivers buried along with their fish stocks, nonexistent jobs, increasing insecurity, dispossessed lands, contaminated water, and villages whose young people have abandoned them: Such is the daily reality of people there.

“Here we are in this OLAM palm grove, on land that has been filled in, where there used to be a river with fish and all kinds of fish products that we could consume; but as you see, this river no longer exists. OLAM destroyed it,” bitterly says a woman over sixty years old, who has trouble standing up.

Mboukou, which is about 32 kilometers from Mouilla, pays a high price for OLAM’s goal to establish “the largest oil palm plantation in Africa” in Gabon, when the country’s priority is to achieve food self-sufficiency (8).

It is apparent that industrial and export-based agriculture is the priority for the GRAINE program. In areas granted by the State, production efforts are only concentrated in those suitable for palm cultivation. Indeed, there are already 42,000 hectares of oil palm plantations; meanwhile food crops (banana, cassava, tomato, pepper) cover only 8,000 hectares, for example in the Ndendé region.

Along with land grabbing and the destruction of rivers, we also found that the there were no jobs for young people in the villages, as had been promised. On our visit to the plantations we could see that the labor came from Asia. Even the most routine tasks in the palm groves were done by foreigners.

Thus, local labor becomes scarce and appears to be on the verge of extinction.

In Yamba, another village where OLAM has plantations, the situation is equally bleak. OLAM plantations are “in front of peoples’ houses,” even though the country’s legislation mandates that companies maintain a regulated distance. “The management and forestry operators had proposed a five-kilometer buffer zone, which communities already considered to be insufficient; today, as you can see, plantations are less than two kilometers away from our huts,” says an indignant farmer from Saint-Martin, another equally-affected village.

Nonetheless, GRAINE continues to claim it is a unique program, aimed at local development and the diversification of the Gabonese economy. Meanwhile, GRAINE actors like OLAM have exported palm oil to Spain, Cameroon and Nigeria.

“Clearly, this program is a scam to make us lose our lands, through contracts that are hard to understand, and hard even to obtain copies of,” reiterates an incensed member of a cooperative that receives a monthly allowance from the GRAINE program.

He goes on to say: “SOTRADER technicians explain to us the risk we run if we do not achieve a production that allows us to pay back the pre-financing from OLAM and SOTRADER—that is the seeds, fertilizers, machinery and wages of 100,000 CFA francs.”

While having granted some property titles, which many people contest due to the lack of involvement and consultation with local peoples (and which are actually decrees he signed), the President of the Republic—hand in hand with OLAM—claims to be effecting development in Gabon (9). Yet this new era, in which peasants become wage workers on cooperatives promoted and created by the GRAINE program, foreshadows numerous obstacles towards achieving the goal of Gabonese people depending on their own farmers for food.

(1) This name has been changed for security reasons.