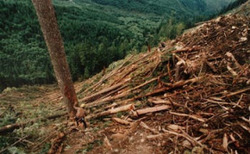 How many of us stop to think about where the ingredients in our margarine came from, or whether the rubber in our car tyres was sourced sustainably? Globalization has disconnected us from the products we buy and it is hard to find out where things were sourced. In some countries huge areas of land are being taken over and farmed to feed consumers’ appetites in faraway lands. Now, a study investigates which countries are targeted most for land grabbing, and which countries suffer most from the conflict between land grabbing and protecting forest.

Cambodia is a classic example of a nation that has experienced a surge in land grabbing in recent times. Since 2000 more than two million hectares of land have been leased to both foreign and domestic investors for economic development. Nearly half of these areas were forested, and the land grabbing has resulted in Cambodia losing more than 12% of its forest land cover since 2000. In countries like Cambodia the demand for land for investment purposes competes with commitments to preserve forested areas under the Reducing Emissions from Deforestation and forest Degradation (REDD+) scheme.

Sarah Carter from Wageningen University in The Netherlands and her colleagues used the "Land Matrix" to identify international land acquisitions in low to middle income countries for agricultural purposes, including biofuel and fibre. At the country level, they measured the accessibility of the land (by estimating average travel times to major cities), and the area of land available for agricultural use, and gathered other information relevant to the access to and security of investments. The researchers also assessed the potential for forest loss due to land acquisitions by looking at the rate of agriculture-driven deforestation, which indicates the demand for farmland.

Out of the 142 countries in the analysis, 80 were experiencing land grabbing – acquisitions of chunks of land greater than 200 hectares – and 62 were not. Not surprisingly, the countries that were top targets for land grabbing tended to have large tracts of land available. But perhaps less intuitively, the research revealed that the land was also relatively inaccessible in top target countries.

"This is most likely because the areas close to cities are claimed already," said Carter. From a political perspective, it was the moderately stable countries that were most vulnerable to land grabbing. "Investors don't want to take too much of a risk, so tend not to go for the most fragile countries, but also don't go for the least fragile countries as these could be more highly regulated," added Carter, whose findings are published in Environmental Research Letters (ERL).

For countries like Cambodia, Burkina Faso, the Central African Republic and Guatemala, it was clear that land grabbing was a direct driver of deforestation. If REDD+ is to work in countries like these, Carter and her colleagues argue that the drivers of deforestation must be recognized. "If a country is aware that large-scale land acquisitions are occurring then they can implement regulations or safeguards to protect communities," said Carter.

But often finding a reasonable balance between saving forests and producing food is difficult, and may require creative solutions such as restoring degraded land for food production, or careful increase in fertilizer use. At the national level it is essential that policy is clear and doesn't contradict itself.

"For example, a country might be implementing REDD+ while promoting investments, perhaps in the same region, without clear guidelines as to what should happen where," explained Carter. Consumers also need to increase their awareness by asking questions of where their products come from, and demanding products that don't encourage deforestation.