Foreign investment in US farmland on the rise 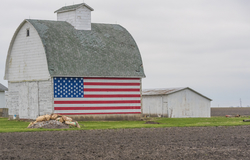 Congressional concerns about foreign investment in the food industry prompted Senator Debbie Stabenow (D-MI) and Senator Charles Grassley (R-IA) to introduce a bill this year to give food and agriculture officials a permanent role on the federal committee in charge of reviewing foreign investment in the U.S., something the agricultural industry has lacked.
The stated goal of the Food Security National Security Act of 2017 — supported by the American Farm Bureau Federation and the National Farmers Union — is to protect U.S. food security in years to come by ensuring that America’s crops, livestock, and agribusinesses remain under domestic control.
“As we think about the future and the growing global population, it’s important to consider who will control the food supply,” Grassley said in a statement. “Today, there may not be a food shortage in the world, only distribution problems that are more the result of politics and not logistic. In the decades to come, it may be a different story.”
LONG-TIME CONCERNS OF FOREIGN PURCHASES
In the 1970s, governors from a dozen states identified foreign investment in farmland as a potential problem in a Government Accountability Office report.
In that report, the states that viewed foreign investment as a possible threat told the GAO that foreign investment could drive up the price of farmland beyond the reach of local residents and allow foreign interests to control domestic food prices.
Because of those concerns, Congress passed the Agricultural Foreign Investment Disclosure Act (AFIDA) in 1978.
Under the act, foreign owners who acquire, sell, or gain interest in U.S. agricultural land must file disclosure paperwork, known as the FSA-153 form, with the USDA’s Farm Service Agency.
Information in the paperwork includes data on where property is located, how much it’s worth, and basic background on how it will be used.
That information is then used to produce periodic reports for Congress and the White House, said Program Manager Lesa Johnson.
“Prior to the enactment of [AFIDA], there was no tracking of foreign-held ag land,” Johnson said. “We didn’t have any means of comparing foreign-held ag land today with foreign-held ag land in the early 1900s or mid-1900s.”
Johnson said the USDA does not verify the data, making the database entirely dependent on self-reported information that could have errors.
In addition, foreign entities only have to file paperwork again when farmland changes hands. There is no routine follow-up required to evaluate whether anything, such as land use, has changed, Johnson said.
For example, a Midwest Center analysis of the data found that almost 1 million acres of foreign-held agricultural land did not list which country owned the land. This land is valued at $1.4 billion.
Data show that a 199-acre dairy farm in Ohio was bought for $594 million, but the purchase price was actually $594,000. Similarly, one of Toyota’s holdings in the U.S. is listed as selling for $737 million instead of its actual sale price of $737,000, because of another three-zero error on one of its properties.
County offices from the U.S. Farm Service Agency try to promote the law by taking out ads in newspapers and scheduling radio announcements, but sometimes foreign businesses or individuals don’t know the disclosure act exists, Johnson said.
“Another issue is sometimes we’ll have a foreign investor file with us for the acquisition of the land, but they don’t know that they are also required to report to us when they sell the land,” she said. “That’s been an issue, too.”
STATE REGULATION VARIES
In addition to the federal disclosure act, at least 22 states regulate foreign ownership of farmland, according to a Midwest Center review of state laws.
Iowa law, for example, forbids any “nonresident alien, foreign business, or foreign government” from holding agricultural land in the state, though certain exceptions can be made related to inheritance.
Missouri law caps foreign ownership of agricultural land at 1% of the state’s total agricultural acreage. But Missouri — which in recent years has passed at least two laws easing restrictions on the amount of farmland foreign interests can buy — ranks near the middle compared with other states with foreign-owned agricultural land, the USDA data shows.
Texas and Maine, which have no laws limiting foreign ownership, each have nearly 3 million acres of crop, timber, and pastureland owned by foreign entities, far more than any other state. Other states with more than 1 million acres of foreign-owned farmland include Alabama, Washington, Florida, California, Colorado, Louisiana, and Georgia.
“We need to have laws in the books that stop global, foreign corporations from controlling farmland,” Gibbons said.
Louisa Burwood-Taylor is head of media for the online investment platform AgFunder, which connects agribusiness startups to accredited investors. She said it can be “very hard to make broad-brush statements” on whether foreign ownership is positive or negative.
“It completely depends on who the buyers are, what kinds of industry they’re coming from, and what their angle is, what their motivations are,” Burwood-Taylor said. “That’s going to be the same for if they’re a local investor or a foreign investor.”
Burwood-Taylor said the spike in investment during the aftermath of the global financial crisis in 2007 was likely tied to an overall move away from stocks, which were perceived as riskier by investors.
“Obviously, a lot of people got burned,” she said. “There was this general kind of shift toward investing in real assets and wanting to own something real and tangible, so I think that definitely played into it.
By Johnathan Hettinger and Robert Holly, Midwest Center for Investigative Reporting. The Midwest Center for Investigative Reporting is an independent, nonprofit newsroom devoted to coverage of agribusiness and related topics such as government programs, environment and energy.  Visit us at www.investigatemidwest.org or follow on Twitter @iMidwest​.