Why is China snatching up Australian farmland? 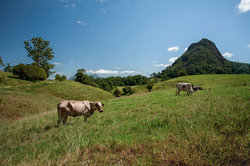 Cows graze near Murwillumbah, New South Wales, Australia. China has replaced the United States as the second-largest foreign owner of agricultural land in Australia. (The UK is No. 1.) (Photo: Auscape/Getty Images)
NPR | 20 June 2017

Why is China snatching up Australian farmland?
by Rob Schmitz 2
At the wine tasting room of Taylors Wines in Sydney, Australia, bottles are uncorked, poured, swished, sniffed and sipped. There's a lot for employees to toast this year.
"The Australian wine sector is growing at a fast rate," says Mitchell Taylor, the winery's managing director. "And what is exciting is the top level, about 20 to 30 dollars a bottle and above, that segment is growing at 53 percent."
That's thanks, in part, to China.

Five years ago, the biggest importers of Australian wines were the U.K. and the U.S. Now that title is held solely by China, and Australia's exports of wine there are growing at 40 percent per year.
In the past year alone, Chinese investment in Australia's overall agricultural sector has skyrocketed threefold, from $300 million to $1 billion — an unprecedented investment boom.
"We're very excited about this agricultural boom that is starting to happen now, not only in the wine sector, but in so many agricultural industries," says Taylor. "And I really believe it's due to having that access of being on the same time zone as China, and being able to provide that clean, green, positive image that Australia presents."
And for Chinese companies, this presents a way to feed the world's largest and fastest-growing consumer class. "Chinese investors want a piece of that action," says James Laurenceson, economist at University of Technology Sydney.
Last year, Chinese home-buyers bought up to a quarter of the new housing stock in New South Wales. In the past few years, Chinese companies have either purchased outright or bought significant shares of the Australian ports of Darwin, Melbourne and Newcastle.
It's the same story for agriculture, says Laurenceson. "I mean, they're the ones who can see it most clearly, right?" he asks from his office above Sydney. "They're seeing Australian wine to China going up by 40 percent last year, dairy products, everything. So they see profit opportunities. And at the same time, rural Australia has this chronic shortage of capital."
And that's why China has replaced the United States as the second-largest foreign owner of agricultural land in Australia. (The U.K. is No. 1.) Two years ago, Dakang, a private Chinese agricultural company, offered to buy Australia's largest cattle ranch. The Kidman ranch makes up 2 percent of Australia's farmland – it's the size of South Carolina.
"The original Chinese bid was 100 percent of Kidman," says Laurnceson. "It got rejected. The treasurer said it was against the national interest. There was another deal, 80 percent, that also got knocked back — still not in the national interest."
Public opposition was strong to a Chinese owner of such a big chunk of Australia. A poll taken by Australia's Lowy institute showed 80 percent of Australians surveyed oppose foreign investors buying Australian land. In the end, the Australian government approved the deal only when Dakang knocked down its offer to a third of the ranch.
But the Kidman deal hasn't slowed Chinese investment in Australia's farmland. University of Sydney professor of Chinese business management Hans Hendrischke says it's only changed the way Chinese investors do business down under.
"The Chinese investors will essentially have to bundle properties and assets to get the volume," explains Hendrischke. "There are all these stories about the Australian vineyard, where Chinese buyers come up and say, 'Let's take the annual harvest and put in the container. Off they go.' "
Hendreischke says this trend will speed up the inevitable: the buying up of 135,000 family farms, and their transformation into large-scale corporate farms, many of which will be devoted to feeding the world's largest consumer class.