Belarusian agriculture to be sold to Chinese 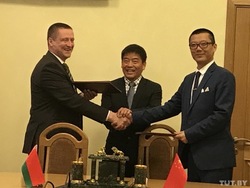 Belarusian agriculture to be sold to Chinese
Belarus and China have made significant progress in the negotiations on a large-scale agro-project. This was reported to tut.by journalists by DRex Corporation president Dai Shiwei and Xinrongji Holding Group president Nian Yongan. As Minister of Agriculture Leanid Zayats stated, the deadlines for all steps are very tight – they must be observed this year.
"There is a huge market in China, and you have foods. I think we will be ok with the deadlines," – DRex Corporation president Dai Shiwei said.
China is to register a joint venture for the export of Belarusian agricultural goods to the amount of at least $ 10 million per month before September 1.
The Belarusian side is a co-founder, and in the future the joint company will get the authority to invest in the form of purchasing shares in the authorized capitals of agricultural enterprises.
China also informed the Belarusians about its intention to buy a stake in the Moscow-Minsk bank and set up an enterprise for the production of a new type of packaging based on polylactide, which should replace plastic and polyethylene packaging (until October 1) in the "Great Stone".
China expresses its readiness to lease 20,000 hectares of land for the construction of 40,000 head dairy farms by the end of the year. Head of the Ministry of Agriculture and Food Leanid Zayats says that it concerns the east of Mahiliou region, Klimavichy district, in order to get additional volumes of raw materials.
Belarus offers to the Chinese side the Vorsha meat-packing plant, Malochny Hastinets and Zdravushka Milk as an investment site. As it was stated, China is ready to consider purchasing these enterprises’ shares.
As DRex corporation president Dai Shiwei informes, the main sphere of the corporation's interests is investing in the dairy production, the Chinese expect to create a large enterprise in Belarus.
It is assumed that there is a possibility of a deep "modernization" of one of the existing enterprises and of constructing a new one.


Chinese company eager to build dairy farms for 40,000 head of cattle in Belarus
MINSK – A Chinese company intends to build a dairy farm complex for 40,000 head of cattle in Belarus, BelTA learned from Belarusian Agriculture and Food Minister Leonid Zayats on 12 June.
The minister said: “The Chinese side intends to develop milk production in Belarus. With this in mind they would like to rent 20,000ha of land for building dairy farms with the total herd of 40,000 head of cattle.” The Chinese company DRex Food Group was mentioned as the company contemplating these plans.
Leonid Zayats noted that the Belarusian side had suggested building the complex in Klimovichi District and Chausy District in the eastern part of Mogilev Region.
Top-ranking executives of the Chinese corporations Xinrongji Holding Group and DRex Food Group came to Belarus on a working visit. They are ready to invest $1 billion in modernizing existing enterprises and building new ones in Belarus. If the projects proceed successfully, the volume of investments may be increased.