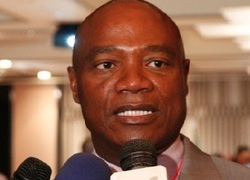 The Mozambican Minister of Agriculture and Food Security, José Pacheco.
APA | 11 Jun 2017
Mozambique invites investors to fund irrigation projects
The Mozambican Minister of Agriculture and Food Security, José Pacheco, has invited potential national and international investors to finance irrigation projects of 200,000 hectares for food production, APA can report on Friday.
These are integrated projects in the Lúrio, Zambezi, Búzi, Limpopo and Maputo basins, valued at over $2.5 billion.
The Lurio River Valley Development Project in the country’s northeast aims to produce cotton, corn, sugar, ethanol and livestock.
“I want to reach in 2050 and have my country on the side of food suppliers and not in the queue to buy or receive any food because we have a comparative advantageous arable land availability, and we have favourable conditions for the development of competitive agriculture in the region, continent and in the world, Pacheco, told a meeting of the National Infrastructure Forum on Thursday, adding that Mozambique needs to industrialise, with the starting point being agriculture.
At the moment, the government is planning to approve the Brazilian-and-Japanese backed ProSavana Project covering several million hectares to grow soybeans by the end of the year.
The initiative is expected to cost $4.2 billion, a sum Mozambique’s cash-strapped government would not be able to finance without outside support.
Source: APA