Danes give Chileans a helping hand in global pork marketplace 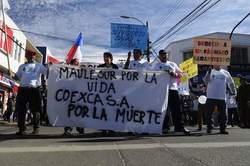 Chileans protesting Coexca SA's construction of a massive pig farm in Maule, which has received financial backing from Danish investors.
NPA | 23 May 2017

(Note from the editor: The Danish Agribusiness Fund is a joint fund of the Danish government, the Investment Fund for Developing Countries, and two Danish pension funds, PensionDanmark and PKA)

Danes give Chileans a helping hand in global pork marketplace
By Alistair Driver
The Chilean pork sector has made a significant further move into the global marketplace, after a major deal was sealed between one of Latin America’s leading pork producers and Danish investors.
Coexca SA has joined forces with the Danish Agribusiness Fund (DAF) in a $12m equity deal that will enable the Chilean producer to double its output.
The agreement, finalised in Copenhagen this week, marks the largest of its kind for the Chilean pork sector, which is already one of the world’s leading pork exporters. The deal will ‘significantly expand Coexca’s production and strengthen its offering to customers domestically and abroad’, according to the parties involved.
One of the more notable elements of the deal is the role of Denmark. The DAF combines private and public investment to ‘improve food production in developing countries’, with backing from the Danish Government.
DAF vice president for Latin America Helle Bjerre said: “Coexca is a good example of what cooperative and progressive farmers and processors can achieve by working with institutional investors who understand their industry.”
Chile has the highest pork meat consumption in Latin America with close to 22kg consumed per person per year. It is already the sixth-largest pork exporter in the world due, according to the press release announcing the deal, to Chile's focus on trade, significant industry re-investment, product safety and improvements in technology.
Coexca is a leading pork producer in Chile, exporting its products to more than 33 countries, with a significant portion attributed to Asian markets. It has turnover of over $85m and employs more than 500 people, with sales offices in Asia and Europe.
Coexca SA chief executive officer Guillermo Garcia Gonzalez said the agreement with DAF and Edinburgh-based agricultural investment firm, JB Equity, which facilitated the deal, represented an ‘exciting new stage of development’ for the company.
“Our union with DAF and JB Equity will allow us to double Coexca’s current pork production capacity and establish a new and modern pig farm in the Maule Region of Chile,” Mr Garcia said.
JB Equity, which focuses exclusively on agribusiness and agri-technology, will join the company as a shareholder. Its chief investment officer Hamish Webb said the transaction represented a ‘perfect union' between one of Chile’s leading pork producers and one of Europe’s most experienced agricultural investors.