China spins a global food web from Mozambique to Missouri 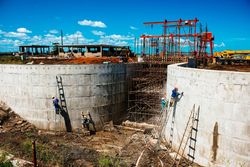 Ongoing construction of a pumping station to supply water from the Limpopo River to Wanbao's rice fields in Mozambique. (Photo: Waldo Swiegers/Bloomberg)
Bloomberg | 22 May 2017

China spins a global food web from Mozambique to Missouri
Inside a gated compound patrolled by armed guards, hulking towers and concrete buildings loom over fields where Silva Muthemba once grew maize and fattened his cattle.
The granaries and surveillance cameras in this corner of southern Mozambique were part of a wave of Chinese investment in overseas farms and agriculture companies a decade ago that sparked accusations of a land-grab as the Asian country tried to secure enough food for its future.
The Mozambique government teamed up with China’s Hubei province to develop the area, hoping to return productivity to levels recorded before the African nation's 16-year civil war. In stepped Hubei-based Wanbao Grains & Oils Co., which spent $250 million on irrigation, machinery and preparation of the 20,000-hectare (49,000-acre) site to grow rice and corn.
But the project has become a lesson in the pitfalls of trying to start big farm projects in poor countries, a story of politics, protests and natural disasters that explains why China's model for agricultural investments abroad is moving more toward buying established brands in developed countries.
“We lost grazing land to the Chinese,” said Muthemba, standing next to his home on the wide plains of Gaza province near the mouth of the Limpopo River. “They said we were going to have jobs in rice cultivation, but we don’t.”


Faced with a shrinking area of good arable land and a population of 1.4 billion people who are eating more, Chinese agriculture companies have been buying or leasing farms abroad for decades. After the world food crisis, when grain prices soared from 2006 to 2008, that investment went into overdrive. But many projects were plagued by corruption, mistrust, local resistance and trade restrictions.
“By and large, they have not achieved the goals they have set,” said Shenggen Fan, an agricultural economist who grew up on a farm near Shanghai and now heads the Washington-based International Food Policy Research Institute. “The general conclusion was that it was not a good investment—it was too quick.”
Muthemba's family was among 8,000 that lost access to farmland in the Lower Limpopo region five years ago, sparking demonstrations, according to Anastacio Matavel, who heads Fonga, an umbrella group of about 270 non-governmental organizations in Gaza.


Armando Ussivane, chairman of the Mozambique-government company that manages the Limpopo Valley and awarded Wanbao’s contract, said the land had been abandoned since the civil war and no homes had been displaced.
He said the idea was that the Chinese would bring technology and investment to re-establish irrigation, boost yields and teach local farmers, so they could help the former Portuguese colony become less reliant on imports. Wanbao had built schools and roads for the local community and had trained 300 local farmers, Ussivane said in a telephone interview. 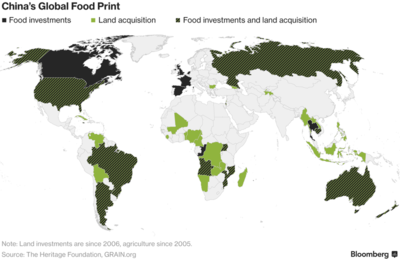 Calls to Wanbao’s office in China weren’t answered, while the Hubei government declined to comment when contacted about the situation in the Limpopo Valley. Staff at the project said they weren’t authorized to speak to the media. The Chinese Ministry of Agriculture did not respond to requests for comment.
Outside one of the six thatched cane huts he shares with his family, Muthemba said villagers agreed to the project because the government promised they would get back better land for agriculture. “But time is passing, and nothing.”
The gleaming fleet of green-and-yellow John Deere tractors is still driven by Chinese workers, while almost two-thirds of Gaza's population lives in poverty. In some areas of the Chinese project where no crops are growing, cattle are back grazing on the land, according to Matavel.
Meanwhile, the Chinese government was paying huge subsidies to its own farmers back home to grow corn and rice, building vast grain stockpiles and reducing the need for imports. And overseas farms like Wanbao's were subject to the same duties and restrictions as other traders in the world grains market.


“One expectation was that these companies would be able to re-export all these grains back to China, but that didn’t happen,” said Fan at the International Food Policy Research Institute. “When you move grain from a country—even if you produced the grain—you have to follow that country’s trade policy. You can’t just say, ‘It’s mine, I’ll move it where I like.’”
But China will still need to source an increasing amount of food from overseas as its growing middle class eats more and demands better quality and variety. The nation already consumes about half of the world’s pork and whole milk powder, and about a third of its soybeans and rice.
So, as the global food crisis abated, Chinese companies turned their attention elsewhere—to finding farms with quality producers in more developed countries whose products would sell for a premium in Shanghai and Beijing.
“China is just getting started,” said Kartini Samon, who runs the Asia program for Grain, a non-profit focused on farmers’ rights that tracks Chinese farm deals. “They’re slowly building their power and their supply chains.”
Chinese firms have spent almost $52 billion on overseas agriculture deals since 2005 and food industry-related transactions have quadrupled over the past six years, according to data compiled by the American Enterprise Institute and the Heritage Foundation.
“More and more of what we’re seeing is Chinese companies wanting to buy really good food businesses, as opposed to buying any food businesses,” said Ian Proudfoot, the Auckland-based global head of agribusiness for KPMG.


They include WH Group Ltd.'s 2013 purchase of Virginia-based Smithfield Foods Inc., the world’s biggest pork producer, and China National Chemical Corp.’s $43 billion agreement to take over Swiss pesticide maker Syngenta AG.
In a key rural policy statement issued by the Communist Party in February, the government said it supports Chinese companies investing in agriculture overseas, from production and processing to storage and logistics.
“They won’t just want the production facilities, they’ll be looking for the story and the brand,” said Proudfoot.
Of the 17 agricultural deals made by Chinese companies over the past two years, only two were in developing countries—Cambodia and Brazil—and six were in Australia, according to the AEI/Heritage Foundation data.
Shanghai Pengxin Group Co., which has dairy-farming interests in New Zealand and a Brazilian grain-trading business, is looking for well-known brands in developed countries that can generate fast returns in markets like Shanghai, said a spokesman, who didn’t want to be identified, in line with company policy.
The pivot to established quality includes a move toward high-margin products like fresh produce that can be air-flown to supermarkets, or meat that requires large areas of land for livestock and feed.
And China's deals are getting larger.


In March 2016, Moon Lake Investments Pty bought the Van Diemen’s Land Co. in Tasmania, Australia’s largest dairy operation, for A$280 million ($210 million) with plans to leverage the island’s “clean and green” image to fly fresh milk direct to Ningbo in eastern China.
“What Moon Lake is doing is trailblazing and, to some extent, that’s opened people’s eyes,” said Peter Skillern, chief executive officer of the Tasmanian Farmers and Graziers Association, who said locals were initially anxious about Chinese ownership of the 192-year-old company.
Amid public skepticism and political pushback, Chinese companies have learned to invest through partnerships or buy into upstream businesses like slaughterhouses, food processors, and grain traders.
After the Australian government rejected a bid by Shanghai Pengxin to buy beef producer S. Kidman & Co., another Chinese company, Shanghai CRED Real Estate Stock Co.,  teamed up as a minority partner with Gina Rinehart, Australia’s richest woman, to acquire the historic ranches, which cover an area larger than South Korea.


With its population and wealth still rising, China's global foray into farming and food businesses is likely to accelerate. Projects like Wanbao’s farm in Mozambique show that, if China is to secure affordable nutrition in the future, it may need to ensure that there's enough surplus also to feed burgeoning populations in Africa, Asia and South America that are projected to add another 2 billion people.
That's creating a “real sense of responsibility” in the way China is now investing, said Vincent Martin, the United Nations Food and Agriculture Organization's representative in China. “You do it in a way that can still benefit the local population, increase their resilience and improve their food security.”


But projects like Wanbao’s are discovering that isn’t so simple. Floods wiped out the 2012-2013 crop in Mozambique and drought reduced the following year’s harvest by about 70 percent, local government data show. Only 7,000 of the 20,000 hectares the venture was allotted have been cultivated.
And Muthemba at least has yet to see any benefit.
“These lands were handed down from my father, who got them from his father,” said the subsistence farmer, gazing across the slow-flowing Limpopo River toward the rice mill. “But the government decided to give them away to foreigners.”