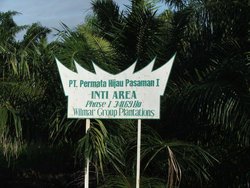 On Jan. 1, the world’s largest association for ethical palm oil production found that Wilmar International had violated the rights of the indigenous Kapa community of West Sumatra, Indonesia, when the company obtained its land to plant oil palm on it.

The Roundtable on Sustainable Palm Oil is reviewing its finding about the palm oil company’s activities in the Kapa people’s customary territory.

On Jan. 1, the world’s largest association for ethical palm oil production found that Wilmar International had violated the rights of the indigenous Kapa community of West Sumatra, Indonesia, when the company obtained its land to plant oil palm on it. The Roundtable on Sustainable Palm Oil (RSPO) also approved a plan that, if implemented, would allow the Kapa to retain control of their customary territory.

But now, following an appeal by Wilmar stating that it has found possible breaches in the complaint-handling process within the RSPO, that decision may be in jeopardy.

The initial ruling, that Singapore-based Wilmar had violated community rights and RSPO rules when it tried to take out a Land Use Rights (HGU) permit over Kapa land, signaled progress in the long-running dispute between the palm oil giant and the indigenous group. Based on the advice of an independent consultant, the RSPO’s Complaints Panel also recommended that the disputed land should be remeasured for development approval with better community participation. This recommendation was intended to give the Kapa more clarity on which lands were taken over by Wilmar, and how to re-allocate the land between Wilmar’s core estate and smallholdings for Kapa people, which would allow them to glean some benefit from Wilmar’s presence in their territory.

Following this decision, the company appeared willing to comply. “Wilmar respects the decisions of the RSPO Complaints Panel and will act accordingly,” Perpetua George, the company’s general manager for sustainability, said earlier this year.

Now that sentiment has changed. According to George, the company was surprised that the RSPO Complaints Panel reached its decision before the independent consultant had gotten Wilmar’s input. “To be honest it came as a bit of a surprise, especially because the report was essentially a joint effort,” George said. Wilmar was also alarmed to learn later that the RSPO did not have the consultant’s full report when it made a decision, but instead based its ruling on a reading of a summary by the Complaints Panel coordinator. “For us, [this appeal] is not about the fact that the decision was made, but that elements were not taken into consideration, and because we felt that it wasn’t right for a decision this big be made on a summary,” George said.

But according to Marcus Colchester, senior policy advisor with the Forest Peoples Programme (FPP), a UK-based NGO that has been helping the Kapa throughout this process, Wilmar remains in violation of the RSPO’s rules because it did not have the community’s consent to obtain a HGU over its lands in the first place. He said Wilmar was stalling. “We have seen this by Wilmar and other RSPO companies disputing RSPO ruling on technical grounds, which we see as a tactic to delay having to address outstanding human rights violations,” Colchester said in an email.

RSPO communications chief Stefano Savi cited the complexity of the case as being partially to blame for how long it took the roundtable to reach its 2017 decision, specifically the “legal and procedural complexities” over how the land was initially acquired. According to George, the land was originally given to the district government in 1997 by the former head of the Kapa community with the intention of having the land developed in collaboration with an oil palm company. But during the Suharto dictatorship of this time “few communities dared to resist land allocations to the companies,” Colchester said. According to him, when planting started the implications in terms of Wilmar’s tenure and control of the Kapa’s land was not explained. As Wilmar — which had been given interim permits by the local government to operate on the land — moved in and began seeking and HGU from the National Land Agency (since absorbed by the Ministry of Land and Spatial Planning), in 2004, the leader of the Kapa community objected. Conflicts continued over the terms by which Wilmar was operating on community lands, but no settlement had been made when the community formally filed a complaint with the RSPO in 2014.

“An HGU is so threatening to the Kapa community because it could mean the end of the rights to their land,” Colchester said. “The community does not want their land to become a HGU as it implies they have surrendered their rights to their lands and once the HGU expires the land will revert to State not to Kapa.”

In a minuted meeting between the Kapa, the RSPO and Wilmar in 2014, the Kapa agreed that Wilmar had paid compensation to the community as part of a 2005 peace agreement that allowed the company to use their lands for the development of oil palm as smallholdings. “They were paid token sums which they interpreted according to their customary law as a recognition of temporary occupation,” Colchester said. “The Kapa believed Wilmar recognized that this payment was for the use of the land and did not amount to a full surrender of the community’s rights to it.”

The key point, Colchester emphasized, is that because the Kapa do not consent to the HGU application, and Wilmar went ahead with it anyway, this represents a violation the RSPO’s rules requiring companies to obtain the “free, prior and informed consent” of communities before operating on their land. “The people want to maintain their historic rights to their collectively owned customary land, which is fundamental to their identity as an indigenous people,” he said.

It remains to be seen how long the RSPO Appeals Panel will take to reach a decision. “The process of appeal is a standard procedure mapped within the RSPO systems, though not a common practice,” Savi said. In fact there has only been one similar instance of appeal before, but it was retracted before the appeals board made a decision.

Colchester is concerned that the RSPO complaints process, including its appeals mechanism, is under-resourced and very slow in ruling on complaints and appeals. “The Kapa’s first complaint was made in November 2014,” he said. “Other complaints against the RSPO members by communities were made more than eight years ago but remain unresolved.”

The Kapa are hoping that the RSPO will uphold its 2017 ruling. The community representatives agreed that they would not ask Wilmar to leave on the condition that the company find an alternative way of renting or leasing land from them other than with an HGU.

Although Wilmar maintains that it would be illegal to continue to pay land rent and operate on Kapa land without an HGU, according to Colchester this is no longer true. Two years ago the agrarian ministry released a framework for communal land titles, which would allow a cooperative, a village or an indigenous community to have their collective rights recognized and rights holders to lease their lands to third parties. Although the Kapa and Wilmar agreed to pursue this avenue of resolution in the November 2014 meeting, there has been little progress. “FPP has provided information on this to Wilmar, and has encouraged Wilmar to explore this option with the Kapa and government,” Colchester said. “But in the last two-and-a-half years, Wilmar has not tried to fulfill its commitment in this regard.”

Wilmar maintains that the purpose of their appeal is to ensure that due process has been followed.  “What Wilmar seeks with this appeal is due process and a fair hearing that takes into account all the relevant information provided by both sides of the case,” George said. “If the Appeals Panel has followed through the necessary due process and still upholds their original ruling, we will respect the decision accordingly as committed RSPO members.”

For the FPP, this appeal represents a test case for the RSPO and its commitment to end land grabbing by large palm oil companies. “It is clear that Wilmar took out a HGU over the community’s land against the community’s express will,” said Colchester. “We are also perplexed that Wilmar – which has an express policy to No Deforestation, No Peat and No Exploitation – is now rowing back on its promises. RSPO must uphold its standards to retain its credibility.”