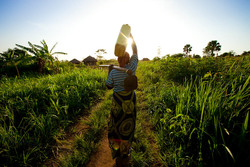 Tucked away over 50 kilometers north of the capital Kampala, Chinese technicians continue to set up the first agricultural industrial park in the East African country.

In different parts of the country, Chinese experts advise local farmers on how best to make agriculture a lucrative business.

Back in the capital, Chinese enterprises at a one day China-Uganda business forum are networking to devise ways of setting up more businesses in the country.

Among the key discussions in the meeting attended by top Ugandan government officials and Chinese enterprises is the agriculture sector, the mainstay of the economy.

Agriculture is Uganda's main economic activity with over 70 percent of the country's population deriving its livelihood from the sector.

Government figures show that the sector growth 2014/15 was 4.4 percent with a contribution of 24 percent to the Gross Domestic Product. The growth was mainly on account of increased cash and food crop production.

Uganda is hoping, basing on the experiences back home, that the Chinese enterprises could set up businesses to boost growth in the sector.

Already some Chinese business people have set up shop. The locals are farming Chinese hybrid rice and fox-tail millet both on a small and large scale basis.

At the business forum, Evelyn Anite, minister of state for privatization and investment said Uganda welcomes Chinese enterprises into the agriculture sector with open arms, noting that government has set up many incentives to make the sector lucrative.

"That is one untapped opportunity that many investors have not gone into," Anite told the meeting convened by Uganda Investment Authority (UIA), a state run investment agency and the Chinese Enterprise Chamber of Commerce in Uganda.

Among the key incentives is that companies would enjoy tax free export on agricultural products. Those that bring into the country machinery that is geared towards adding value to agriculture would not pay tax on the equipment imported.

Jolly Kamugira, UIA executive director told the meeting that the companies also stand out to benefit from the different lucrative markets that the country has access to.

Uganda exports its agriculture products tax and quota free to the United States through the American Growth Opportunity Act. It has also access to the European Union market and other markets like China on tax and quota free basis.

According to UIA, the investment opportunities in the sector are in commercial farming, agro-processing, manufacturing inputs, cold storage facilities and irrigation among others.

Uganda is optimistic that with the conclusion of the ongoing transport and energy infrastructure projects, the cost of doing business in the country would go down enabling investors to recoup big returns.